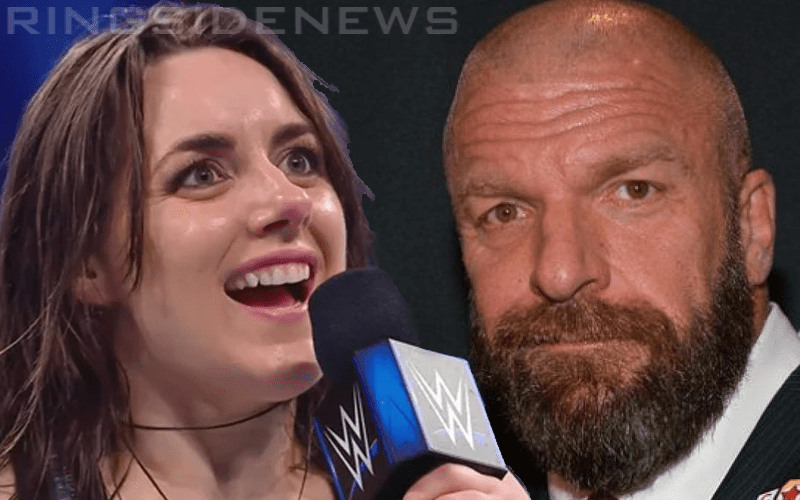 Triple H has a lot of influence in the WWE Performance Center. NXT is his baby in a lot of ways so anyone who goes through the developmental system will likely see his influence in one way or another. Nikki Cross is no exception and she recently spoke to The Gorilla Position about how The Game was able to help her create this unique character.

Although Triple H did help form this character as his “brainchild,” Nikki Cross was able to add her own flavor to the mix. There is a lot of room for Nikki Cross’ character to continue evolving as well. So we will just have to wait and see if that is permitted as she is now on the main roster and out from under Triple H’s umbrella.

“I love it. I really do love it. It’s such a fun experience, and it’s…. What I’ve enjoyed the most about this character is that we’ve been able to develop for the last two-and-a-half, three years. Triple H had this brainchild and this idea and it was his baby and then he brought the idea to me and I loved it and then I was able to bring that to life and then put my salt and pepper [on it].”

“Put my little [parts] on it. Bring in elements from my real life, bring in stories from real life, make her relatable because I think the character Nikki Cross, she’s so much fun and she speaks to so many different people in so many different ways. It’s almost like telling everyone, ‘Hey, it’s okay if you don’t fit in’. Neither did I, and we have so much fun and I think it really tells people to embrace… it lets people know it’s okay to be as crazy as you want and play as you want and I think it really encourages people to just live in the moment and I think that’s why it’s so much fun because I get to completely live in the moment and I just get to see whatever comes out of me so there really is that real life aspect of it because I’ve made that a part of me.”

“So for me, there is that real life aspect to it and I think Nikki Cross has a very important message and a deeper message which I’m excited to introduce to new audiences. People that haven’t seen the character before, I’m excited to introduce that because there is so many layers to the character and I think we’ve only scratched the surface for the last two-and-a-half years. I actually believe we can go so much deeper and I’m excited, really excited for that development.”

Nikki Cross has not received much of an opportunity to expand her character or really get a spotlight since her main roster call-up. Apart from displaying the seldom insanity, Cross has been relegated to a lesser role. She has a lot of abilities that Vince McMahon might need to utilize soon enough. Because SaNITy’s Twisted Sister is ready to play.