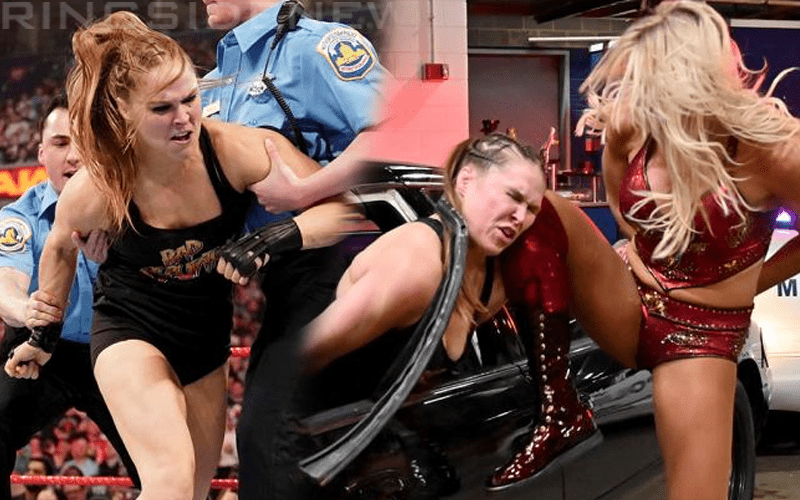 Ronda Rousey, Becky Lynch, and Charlotte Flair were arrested during the go-home episode of RAW before WrestleMania. This was a pretty outstanding and ridiculous way to close up this storyline, but WWE does what they want.

The Baddest Woman On The Planet recently addressed this arrest on her YouTube channel and she had a lot to say to explain herself.

Ronda said of her 6-woman tag team match on RAW that she thought WWE ran out of “ridiculous ideas,” but then they came up with another one. She showed off a souvenir that she took from jail and explained how she was processed by “DC’s finest.”

Rousey was all smiles before the go-home RAW before WrestleMania too. This was, of course, before she was arrested. She explained the chaos that went down during RAW quite well and provided her reasoning for resisting arrest.

“What was on my mind was these cops weren’t doing anything to protect me. I was f*ckin’ going along with them cuffing me. As soon as they put the cuffs on me, and went ‘you’re arrested’ I was like, ‘fine I’m arrested.’ Then Becky comes over and clocks me while I’m cuffed and none of them do anything about it and then it was like ‘come and take me out’ and I’m like ‘okay officers, you’re coming to take me out.'”

“Then they’re taking me out and then Charlotte comes over and f*ckin clocks me too and I’m like, ‘hey! You guys obviously aren’t doing anything to protect me so I have to protect myself so at that point I’m just… I have to like… I don’t know, it just got to a point where it was just so ridiculous to go along with what they were telling me because they kept bringing me with my hands behind my back and people hitting me so how was I supposed to keep going along with that at that point?”

It should also be noted that Ronda Rousey hijacked a police car in the process. In fact, if you add up all of their actual charges if this had been a real event there is no way any one of those three women would be free right now.

All of that chaos certainly made the road to WrestleMania exciting.