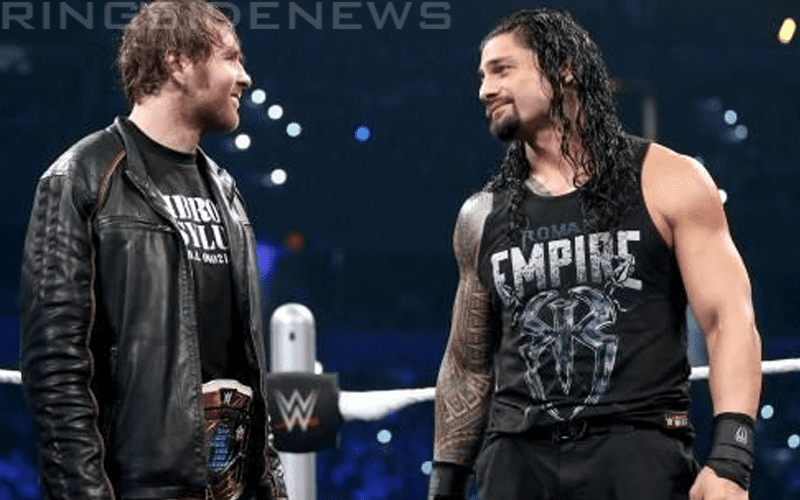 Dean Ambrose looks to be leaving WWE once his contract is up later this month. It was a big surprising choice because he rejected a huge contract in the process. Seth Rollins already commented saying that he doesn’t understand this decision, and Roman Reigns can only support his friend while wishing the he would change his mind.

While speaking to the Gorilla Position, Roman Reigns opened up about Dean Ambrose leaving WWE. He obviously wants his friend to stay with Vince McMahon’s company, but The Lunatic Fringe is going to do whatever makes him happy.

“I want him to stay. Dean, if you’re listening stay do not go. I’ll buy you a bottle of Jack and beer every single night… yeah you know I mean we just want him to be happy. I think at the end of the day the selfishness wants him in our locker room, but as a friend and as a brother I just want Jon to be happy.”

“Ultimately if he has to recharge his batteries, but I want my friend to be where he wants to be and have the proper placement for his life. Whatever’s gonna achieve his happiness I just want whatever is gonna make him happy.”

“I’m not gonna lie, we’re selfish beings, that’s just how we are and I want our friends with me. Not only that, but Ambrose is a workhorse, man and I don’t throw that term around lightly. There’s not many of us in this world as far as the work load that we can take and what we can handle and manage. Ambrose is one of those guys, one of those guys I can depend on 52 weeks out of the year so regardless of whether he’s coming or going someone’s going to be able to work with a brilliant Superstar. You know someone who truly believes in what he’s doing and has a great passion to get better and an amazing work ethic. Regardless he’s gonna land on his feet and hopefully, it’s gonna be right next to me.”

Dean Ambrose’s WrestleMania status looks like he is not booked at all on the show of shows. He actually has a WrestleMania Axxess signing that morning which is generally a spot reserved for people who aren’t going to be needed on the showcase of the immortals.

Ambrose could end up in AEW or any other pro wrestling company that can afford him. He is an incredible talent and obviously, Roman Reigns will miss his friend if he does leave WWE which is looking very likely at this point.