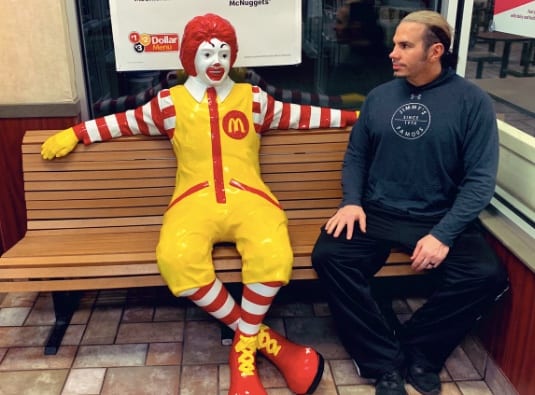 Matt Hardy has gone through many changes over the years in WWE, and it’s good to see that the man himself is willing to joke about that from time to time.

Towards the back end of his singles run with WWE in the late noughties, a lot of fans started picking up on the fact that Matt’s physique had changed over a period of a few years. Since returning to WWE, however, and specifically since making his latest return to WWE television, Matt has looked in the best shape of his career.

Alas, we all take lessons from the past and use them moving forward, which is quite clearly what Matt has done.

Some fans used to refer to Matt as ‘Fatt’ Hardy which, as you can imagine, was equal parts insulting and equal parts ridiculous. Hardy has one of the best social media games in all of professional wrestling, though, and he isn’t going to let something like that stop him.

He and Jeff seem to be set on going after one last run with the Tag Titles, and can anyone legitimately say that isn’t a great idea? Both of their respective singles runs could’ve been a lot better since their WrestleMania 33 return, but at the end of the day, they’re legends of this business.

They’ve had the kind of durability in pro wrestling that most wrestlers could only dream of having, especially when you consider what they’ve been able to win along the way.