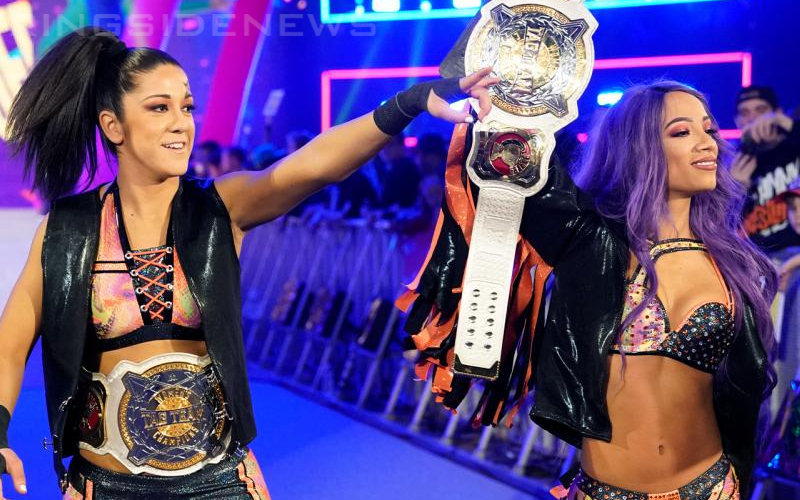 Sasha Banks and Bayley came out with their WWE Women’s Tag Team Championships on RAW this week. They were asked about being afraid of going to SmackDown Live as the IIconics said. Then they revealed that the Boss n Hug Connection will appear on SmackDown Live this week and it will be… .

Banks brought up WrestleMania and then The Divas Of Doom came out. They entered the ring and Beth Phoenix started cutting a promo to put the Boss n Hug Connection over. She said that her and Natalya would have loved to have Women’s Tag Team Titles back in the day.

Phoenix said that Nia Jax and Tamina “awoke the dragon” and it got her thinking that maybe her and Nattie’s dream of becoming tag team champs could become a reality. Phoenix said she is ready to step out of retirement, stand next to Natalya, and challenge the Boss n Hug Connection for the titles at WrestleMania.

This challenge got a huge “yes” chant from the crowd. Bayley said that Phoenix might need more time to prepare because she’s been retired for six years. Nattie snapped back and listed Phoenix’s accomplishments before Sasha Banks said that Nattie is just riding Phoenix’s coat tails to .

Suddenly, Nattie slapped Banks and they brawled while Phoenix shoved Bayley down. Then Natalya and Sasha Banks had a match afterward. In the middle of that match, Nia Jax came out to cut a promo on Beth Phoenix where she said that she’s done more in 3 years than Beth did in her entire career.

Jax called herself a “prettier, stronger version of the Glamazon” right before Tamina jumped Beth Phoenix from behind. “See you all at WrestleMania,” Nia Jax said before the heels left.

Therefore, it appears to be The Boss n Hug Connection vs Nia Jax & Tamina vs The Divas of Doom at WrestleMania. We will just have to wait and see if they add a team from SmackDown Live to even this match out. However, no actual match was booked for the show of shows during RAW.

Dave Meltzer mentioned on Wrestling Observer Radio that WWE could be planning something different for the Women’s Tag Team Titles for WrestleMania. Bayley and Sasha Banks said they will be on SmackDown Live which could hint toward an even bigger match to come.

“It’ll at least be three teams and I’m sure that there’s at least going to be three or four more teams added into it. Because the original idea was a SmackDown team and an NXT team as well. If there is an NXT team it will probably be I would say Kairi Sane and Io Shirai — which actually if that’s the case maybe they don’t have their work cut out for them nearly as much.”

“It’s possible, you know generally to debut a team at WrestleMania it’s tough although for Io and Sane I could easily, easily make that exception. “

WrestleMania is set to be a stacked card and even with the matches added to the show of shows during RAW, we are looking at a very long night. Therefore, a fatal four-way or five-way for the Women’s Tag Team Titles might be able to provide enough action to help us get through some of the longer portions of the event.