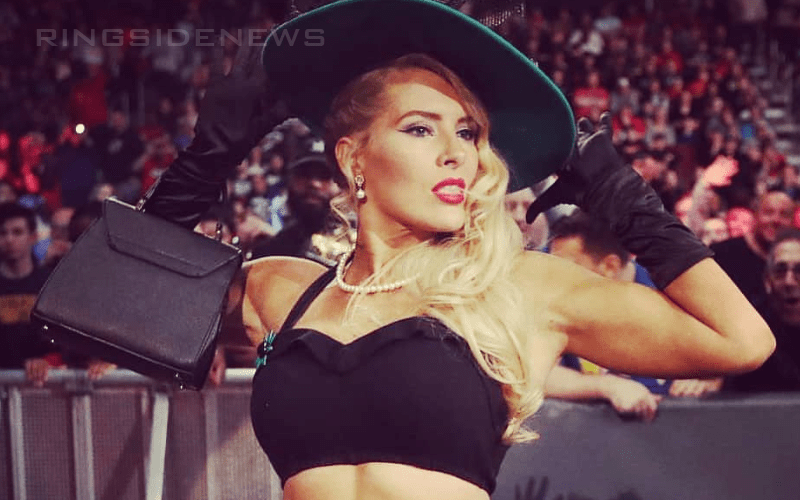 Lacey Evans is coming out practically every week on Raw and SmackDown Live just to wave for a reason. Vince McMahon wants her to be seen and fans are starting to grow very curious about what she can do in the ring. Lacey Evans hopes to be the face of WWE very soon no matter what fans think.

Evans has an incredible backstory from being a US Marine to losing her home in a hurricane. Vince McMahon reportedly sees huge things for Evans as well and she could be in consideration to be one of the top three females in the company.

While speaking to Gorilla Position, Lacey Evans was quite frank about who she wants to face next. It doesn’t matter who is holding the title, because she wants it in order to start her rise to become the face of WWE.

“Anyone with a title. I get asked this a lot and you know? I go for the gold. My whole life — don’t get me wrong any opportunity is great — but if you honestly, if you want me to tell the truth about who I’d like to get my hands on, give me someone who has the championship title because that’s what I want. Isn’t that everybody’s goal? Because if it’s not then they’re lying if they tell you that.”

“I want to be a champion. I want to be the face of WWE. Because I know that I am capable of setting the proper example for women and people all over the world. So hopefully, that time comes soon than later, but yes, that would be who I would like to get my hands on.”

Only time will tell how WWE will use Lacey Evans. She is extremely athletic and is working house shows. Her debut at the Royal Rumble consisted of a full entrance and time on the microphone to cut a promo. So you never know what could be in store for the Lady Of WWE at WrestleMania.