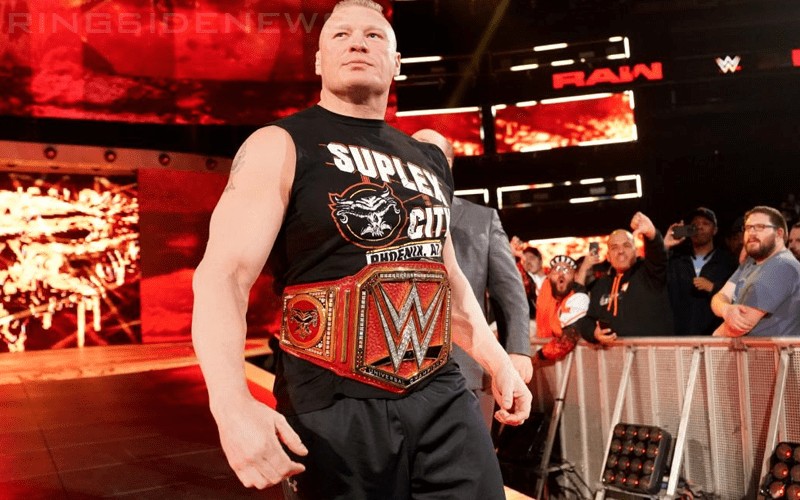 Brock Lesnar departed from WWE after WrestleMania XX so he could try out for the Vikings NFL team. The fans turned on his match against Goldberg completely because everyone in the MSG crowd knew he was taking off. Even “Stone Cold” Steve Austin couldn’t save the match, but everyone seemed to enjoy both Goldberg and Lesnar receiving Stunners when it all was said and done.

During a recent episode of Something To Wrestle With, Bruce Prichard reacted to reports about the WWE locker room being jealous of Brock Lesnar after he bought a $400,000 plane to make shows. Some of the boys in the back cursed his name and didn’t appreciate that Lesnar wanted to travel his own way. Then Prichard discussed Brock Lesnar desire to leave WWE.

“I think that he needed a break, but at the same time, he was young and we were hoping to go with him at the time and do something with him, so you wanna capitalize on that and make hay while the sun shines.”

“So with it was ‘what are you gonna do?’ and then when he decided he wanted to go on and play football. It’s ‘Okay’ and you just move on. You can’t do a whole lot people don’t like ya and they’re jealous of you and you’re happy — who cares?”

Prichard said in the end, it didn’t change his life and Lesnar went on and did what he wanted to do. There were people backstage who had some jealous comments about the Beast Incarnate while he was the Next Big Thing on his own private plane, however, he had his own path to travel and that was fine by the front office.