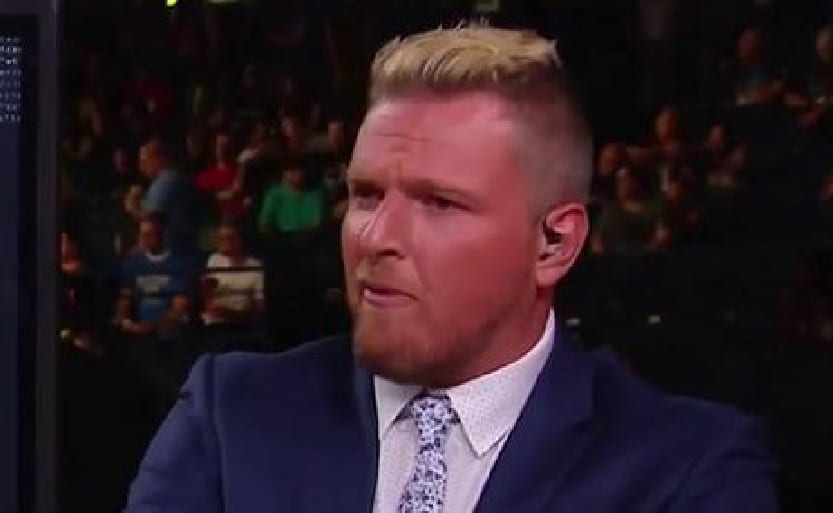 Pat McAfee is still a relative newcomer on WWE TV, but is quickly moving up the ranks within the company. McAfee has already cemented his place in WWE and continues to find himself in new positions almost every month.

McAfee was interviewed as part of the WINCLY podcast. During the course of the podcast, the star commented on his position in WWE, being told horror stories about working for WWE and reacted to the controversial comments made by Sam Roberts.

The first discussion was what McAfee was asked of him as a pre-show panelist for the company.

“That’s a great question. I follow NXT hardcore now because I have to talk about those things. But they basically want me to talk from a sports and a fan standpoint. They don’t tell me any direction to go…I’m not privy to the meetings of what they’re looking for in the shows. I assume if they want me to be different they’ll tell me and if it sucks they’ll fire me and if it’s not, I’ll just keep doing my thing.

“I think analysis can cause paralysis sometimes so I don’t go in there with much thought of what they’re looking for. I’m just gonna go be myself.”

Newcomers are often told horror stories about working for WWE. This can be in reference to the heavily scripted nature, the work necessary and for a number of other factors. Despite this, McAfee says he has felt right at home with WWE and they have been extremely hospitable to him.

“I heard these stories about it’s a hard place to work and everything’s heavily scripted and they want to fact-check everything. But getting in there, they couldn’t be more hospitable to me. I heard a lot of horror stories about working in the sports entertainment business. But now getting in there… it’s basically a family. Everybody knows everybody. Everybody takes care of everybody.”

He also added that it was Michael Cole that texted him out of the blue. That is where his journey with WWE really started.

“I got into NXT when they came to NXT Indy at a live event.

“I didn’t get a call from anybody for a long time. It wasn’t like an act of me seeking them out either. They called me after hearing I was at the NXT Indy show, I shot a video about Adam Cole and fast forward a couple of months later, I get a call from Michael Cole and he was like, ‘Hey, are you an NXT fan?’

“I was like, ‘Yeah, I’ve actually been into it since they came to town.’ He was like, ‘Cool. Will you do our pre-show?'”

On the expansion of his role in WWE, McAfee explains that he isn’t sure what it’ll grow into. He does know that he wants to continue helping the company in any way he can.

“I have no idea what the role is going to grow into because it’s already grown so much from what it was originally supposed to be. I have no clue and am just gonna see what happens. Hopefully help the company that helped me so many times and I hope to help them move into the “forever” stage.”

Finally, the controversial comments by Sam Roberts on stars like Bianca Belair and Finn Balor were brought up. McAfee remembers being shocked by the entire situation, and doesn’t agree with him. He remains a friend of Roberts, but notes that he wouldn’t do that type of stuff as he would rather build people up as opposed to knocking them down.

“Hey. That was an insane moment wasn’t it when Sam did that? I was mind-blown because Sam is always the super wrestling nerd…and then all of a sudden it comes out of nowhere.

“I don’t agree with him but it feels like Sam Roberts is becoming quite a character.

“I don’t enjoy that type of stuff myself. I enjoy making people happy and hopefully people enjoy it and have a good time.

“I enjoy when people do things. I take it from a standpoint of entertainment and I think if he’s drawing up hate on the internet…I assume that’s what he’s looking to do. For me as a friend of Sam Roberts, I enjoy that.”

What was your initial reaction to Roberts’ comments? Do you agree with McAfee’s points? Let us know your thoughts, opinions, and reactions in those comments below.