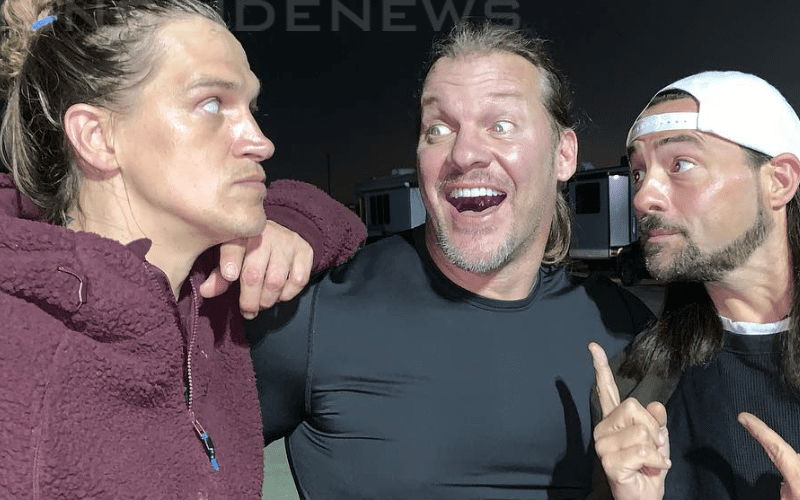 Chris Jericho is not just a pro wrestler and frontman for Fozzy, because he is also racking up a slew of acting credits too. He recently wrapped up shooting for the highly-anticipated reboot from the Jay and Silent Bob franchise and we can’t wait to see what kind of part Jericho will play.

While posing with Jason Mewes and Kevin Smith (who has lost a remarkable amount of weight in recent years), Y2J was all smiles. Obviously, he had a great time, but how can you not have a good time around the iconic comedy duo?

that’s a wrap! To say it’s an honor and a bucket list event to be a part of the hilarious new @jayandsilentbob flick #JayAndSilentBobReboot would be the underestimate of a lifetime! Thx to @thatkevinsmith & @jordanmonsanto for casting me in 2 AMAZING parts in 2 different movies in less than 7 months, (and dousing me in 2 separate disgusting substances in each) and for finally assembling the #Y2JayAndSilentBob lineup I’ve been dreaming about since I rented #Mallrats at #BlockbusterVideo 24 years ago! (Plus @jasonmewes was even cooler than knew he would be! Btw…Did I win #FiveDollarFriday, Mewes??) #CanYouDigIt #HaterTots

The upcoming Jay and Silent Bob reboot started filming last month and Y2J is certainly a great addition to the cast. Hopefully, Jericho’s role in the film will create more opportunities for fans to see more of him on the silver screen.