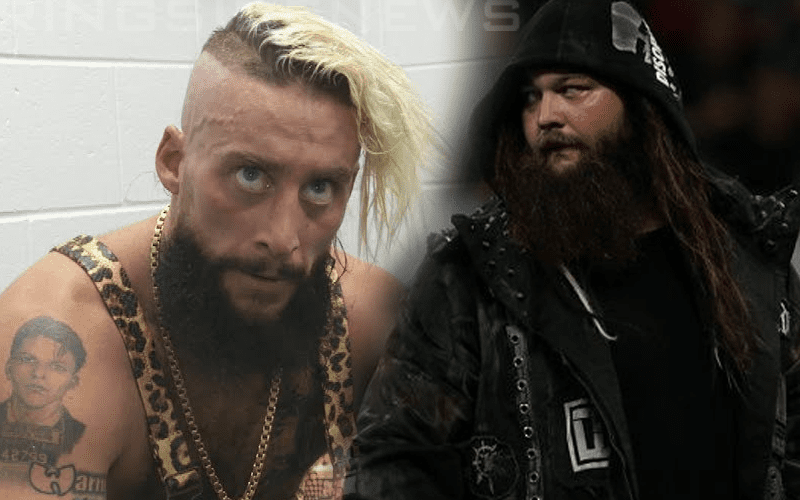 Enzo Amore is no longer a WWE Superstar, but he apparently still has some friends in the company. While speaking to Title Match Wrestling in a recent shoot interview, he revealed that the Eater Of Worlds went out of his way to praise the Realest Guy In The Room after watching him take a beating in NXT.

Amore got off to a slow start in NXT with some consistent losses. Big E squashed him in a big way, but through that defeat, Real1 caught Bray Wyatt’s eye.

“I’m sitting backstage and I’ve had four matches. They were all against Big E, and all that happened was he grabbed me and gave me his finisher five times. And every time I took it, I took it a different way. I took wild bumps, landed on my arm, my head, my neck. And [Bray Wyatt] was sitting up there watching me take these finishers a different way every time.”

“He pulls me aside, puts me under his arm, and goes ‘You’re gonna be alright by me, boy.’ This guy was in the business, and he was the first guy in the business, born into it, to be like, ‘Bro, f*ck what they’re saying. I see how hard you’re working to learn this sh*t in the ring, and you’re willing to kill yourself.’ So me and Bray Wyatt have been best buddies ever since. He was the first guy to really see that.”

Bray Wyatt is quite elusive on social media. He is gearing up for a return and claims that we will all be impressed by how great he is. He really seemed to make a difference in Enzo Amore’s career which shows how a man like Wyatt who has pro wrestling in his bloodline can be an amazing leader in WWE.