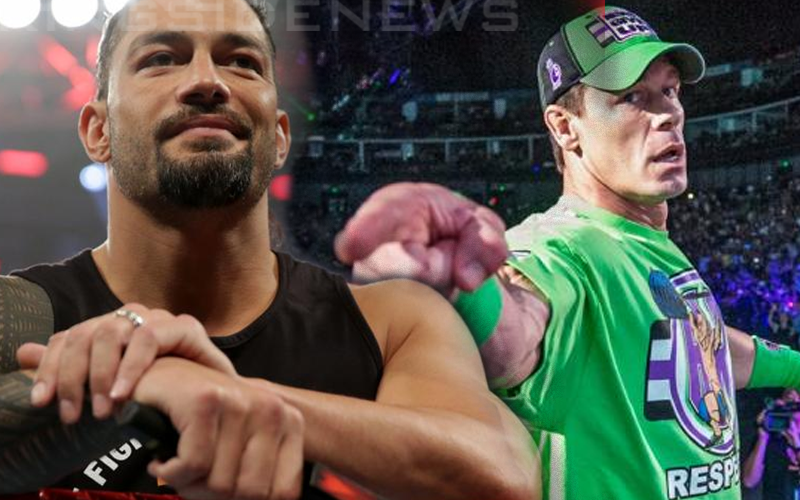 Roman Reigns is back after four months of focusing on his health and getting ready for a strong return. The Big Dog is now ready to pick up where he left off as a locker room leader and the face of WWE.

While speaking to WFF on 100% Catch in France, Roman Reigns was asked about being the face of WWE once again. He explained that he has always seen himself as a locker room leader and a representative of WWE which is how all Superstars should feel. He also couldn’t resist throwing in a little joke at John Cena’s expense in the process.

“I guess two ways to look at this. I’ve always looked at myself as the face of WWE whether John [Cena’s] there or not. I feel like I’m far more attractive and I have a face than John.”

“So I’ve always looked at myself in that regard, but I also think that John and any other Superstar within WWE can tell you I think there’s a lot of faces in WWE. That’s what makes our product and our brand of entertainment so compelling is that we’re not all the same.”

“We’re just like how the world and world and all the different customs are. We’re a huge melting pot. We’re all from different places all across the world, all across the globe and we’ve all come together off of one natural bond and that’s storytelling. That’s the physicality of storytelling within a ring and that canvas is where we paint our pictures.”

“So I think that it is important not only for the people who are considered on top of WWE, but every performer, every contributor, ever piece of talent to look at themselves as the face of WWE and also representative of WWE and the wrestling industry and the families as well. So I think that everybody took themselves as the face of WWE, the WWE can’t go wrong.”

“So I do believe that I’ve always been the face of WWE, but yes with a huge name like John Cena no longer being a full-time performer, I think you know, there’s as much if not more pressure on me to do my job at a high level than ever. I also think it’s across the locker room. I’m not the only guy who feels that way. I guarantee you Seth Rollins feels the exact same way I do and he has that same pressure to perform and to you know keep our product at a premium.”

Roman Reigns put Seth Rollins over big-time, but he has a good reason to. Rollins was the man who stepped up in a lot of ways after Roman Reigns had to leave. This is one of the reasons why he is in line for a WWE Universal Title shot at WrestleMania 35.

As WWE carries on there are likely to be other big locker room leaders, but Roman Reigns would like everyone to take on that mindset. Just like he plans on taking the Universal Title from Seth Rollins at WrestleMania 36.