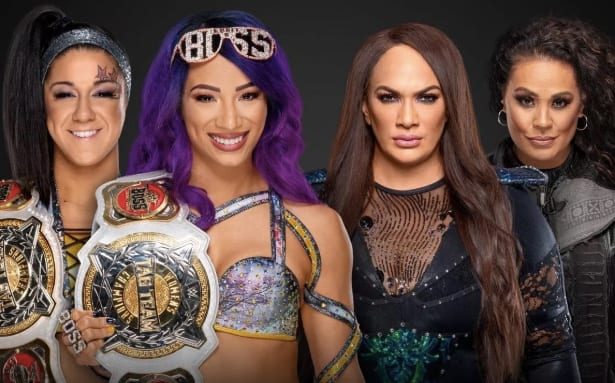 As seen on Sky Bet, the betting odds have been released for Bayley & Sasha Banks vs Tamina & Nia Jax at WWE Fastlane.

The introduction of the Women’s Tag Team Championships has allowed for more titles to be up for grabs for the women on the main roster in WWE, and to an extent, the women down in NXT. Bayley & Sasha Banks are the inaugural champions, and they’ll be defending their belts against Tamina & Jax in Cleveland this weekend.

Some fans have already written this off as a guaranteed win for the Boss ‘N’ Hug Connection, but you really do just never know what WWE is going to pull out of their hat next.

The odds suggest that Bayley & Banks are the 1/4 favourites to retain the titles, with Jax & Tamina being 11/4 underdogs. That doesn’t mean they definitely won’t win the belts, but it’d definitely be considered an upset.

Whatever happens it seems like it’d be foolish for WWE not to feature the titles on the main card of WrestleMania 35, and the best chance of that happening would probably be to have Banks and Bayley holding the straps.

Perhaps the two ‘best friends’ will turn on one another and begin a feud of their own going into the showcase of the immortals, but for now, it’s all up for debate.

The dynamic between the two teams should be pretty interesting as it’ll be a kind of ‘speed vs power’ battle, and while fans may not like the team of Nia Jax and Tamina that much, you can’t deny that they’re effective.