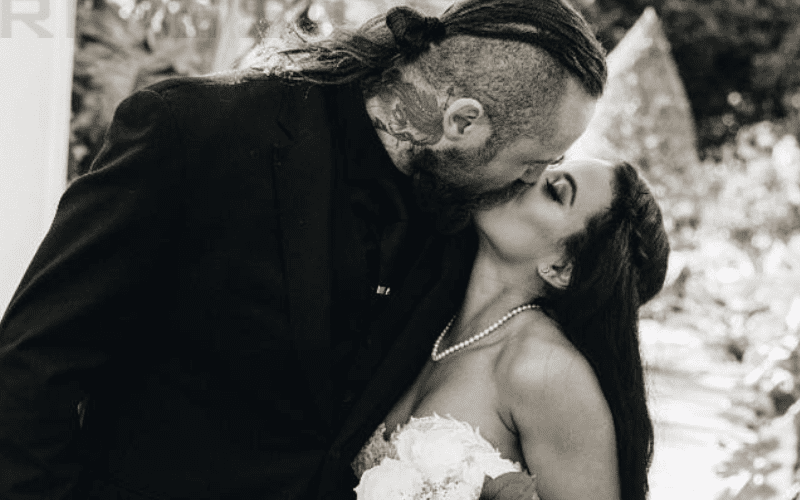 Aleister Black was one of the four top NXT Superstars who debuted on the WWE main roster just a few short weeks ago. A lot of things have happened since then like Tommaso Ciampa’s preexisting neck injury becoming an issue, but the ones who could work remained on the road with the NXT brand through this weekend.

It appears that Aleister Black’s time in NXT could be done for good. He recently addressed a live show crowd to express his appreciation. He also posted a much longer goodbye to the NXT Universe where he continued to speak about how much being a part of that brand meant to his career. In the process, he spoke about how his wife Zelina Vega has been able to help transform his mindset to help create a better Black.

It’s been a ride NXT, a hell of a ride.
In less than three years I went from psychological and physical problems, anxiety and panic attacks to thriving in environment. The majority of you only see the actual in-ring work and none of what goes around or behind it. I can tell you with full conviction that if you knew how this world truly works the majority of you wouldn’t have such a high strong opinion nor give the criticism that some of you give.

You think you know, but you really don’t. I often sit back and realize how quickly life moves and how fast things come and go and just like that the era of NXT has come to an end. In the entire period I left people behind, people left me behind, I got rid of toxic people and I gained a new outlook on life. After tons of therapy and life coaching by the wonderful  I am finally moving away from old habits because the truth is that I myself have been a very toxic individual for years that couldn’t move his childhood and events that occurred in teenage years. If all you know is lies and deceit you become lies and deceit to understand your anger and sadness.

I used to call myself the king of self-sabotage and if you tell yourself something long enough you’ll believe it and don’t move away from it. I still deal with a guilt for things I have done to others as well as strangely feeling for letting others do that to me as well, it’s like you let yourself get compromised but do nothing about it to change it, until a few months back when I learned to slowly forgive myself thanks to person.

A big part of that change is also due to my wife who’s changed my outlook on life from trying to die as young as I could to on to things that are worth holding on to. But enough about that, we’re here for the next chapter of my career. I cannot stress how important it is that you, the fans, were there. I could’ve tried my hardest but without your support (as cliche as that sounds) this would’ve never gotten as far as it did, and obviously beyond that… of words from a guy who’s known for being quiet, but hey, that means it’s important to me. Osu.

Black’s marriage to Zelina Vega is why his SmackDown Live debut against Andrade was especially entertaining for smarter fans. Because as Aleister Black was doing well in the match, Vega had to act like it was torture for her to see and she beamed with happiness whenever Andrade would inflict punishment on her husband.

Aleister Black was known as Tommy End on the indies before coming to NXT. He soon took the new name and it created a life of its own after that. Now with Aleister Black as a full-time WWE Superstar, it is highly possible that WWE could have someone that they can trust to carry a very heavy load. Hopefully, he will be given that chance.