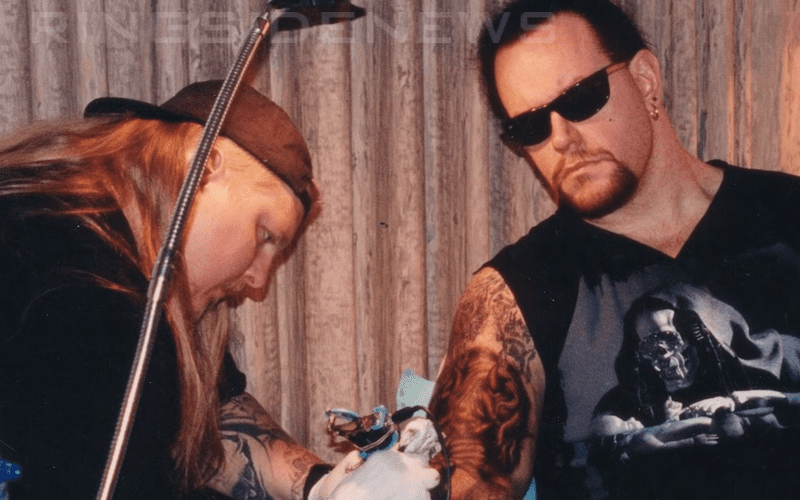 The Undertaker took out tons of competitors during his time in the ring. He is known for keeping kayfabe through most of his WWE career only recently dropping this practice. He is also known for his sinister tattoos that he started collecting a long time ago.

World famous tattoo artist Paul Booth has laid ink into The Dead Man’s skin in the past. He recently spoke to Loudwire and explained what kind of a client The Undertaker was to deal with during their first session.

This was a private tattoo session in a hotel room because Booth didn’t want anyone bothering the famous WWE Superstar. Even though The Undertaker is a big individual, Booth described him as quiet as he remained in character the entire time.

“That was the first-time—I believe—I met him. Very quiet guy, very in character. Quiet, big, menacing guy, he had to duck and turn sideways to walk into the hotel room. I remember thinking, ‘Holy crap, this guy is huge.’ … The Undertaker’s a guy that really only speaks when he had something to say. As I remember it, ya know? I mean we’ve had great conversations, very polite guy, very serious guy, but very friendly. You see him being The Undertaker in real life, ‘Yeah, that’s The Undertaker.’ He still has that vibe, I mean it’s very genuine.”

“I tattooed his bicep. The demon I drew was inspired by him, because of the way he would come into his victim [during the pin] and kind of had that thing going on. So, I did this tattoo of a demon kind of lurching forward, not him, but inspired by him. And I remember his arm was so huge it was like doing a back piece, I couldn’t even wrap my hand around it.”

The Undertaker’s in-ring career might be winding down. He isn’t feeling too good about WrestleMania meaning another match for Taker might not happen for a while. He will probably lace up his boot again, but until that time comes it looks like he has dropped the Dead Man persona as he continues being Mark Calaway in his real life.