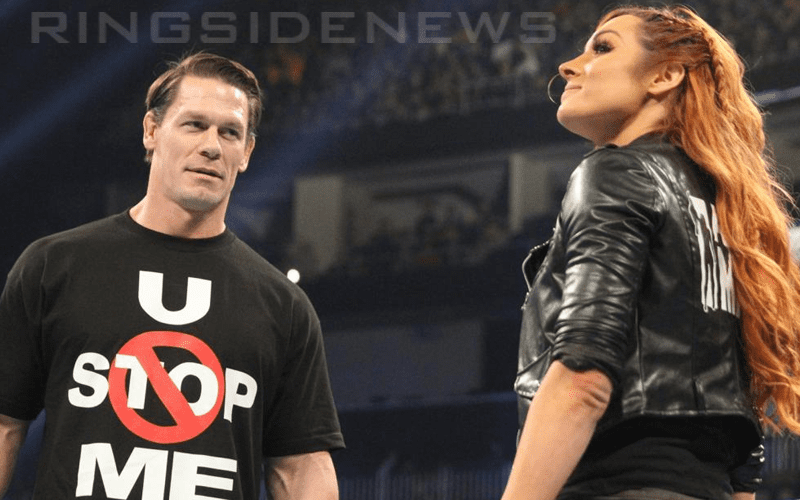 John Cena didn’t start out on the top of the pro wrestling business, but he certainly turned it into a fruitful career. Becky Lynch started off as a hard worker without getting any push for her efforts, but she is finally getting the push she deserves thanks to the fans rallying behind her.

As he spoke to Uproxx, John Cena discussed the fact that WWE is an entertainment business. It is all about what the consumer wants and right now people are very pumped to see Becky Lynch on the road to WrestleMania.

“We are in the entertainment business. Whatever the consumer finds most entertaining, regardless of sex, race, creed, color, religion anything. What the consumer wants, WWE will give. I think Daniel Bryan a few years ago in the main event of WrestleMania was a great example of that. And I think the women that are supposedly within the main event of WrestleMania this year were pushing forward toward that historic, monumental occasion.”

“I’m one of those people who think that it should’ve happened a whole lot earlier, but I’m very proud that our audience is at a point where they’re screaming at the top of their lungs, ‘Hey, this is what we want to see.’ I was so extremely happy for Becky Lynch to be able to find this personality that she carved out of thin air and almost out of desperation and become so successful with it.”

You never know how things will turn out as we approach another WrestleMania. Becky Lynch is riding a very high wave of popularity and earning more attention with every tweet. It is looking very good for Becky Lynch at WrestleMania this year. On the flipside, John Cena is still without a WrestleMania opponent, but if he is available (and he should be) WWE will likely figure out something for Cena to do at the show of shows before The Man comes around in the main event.