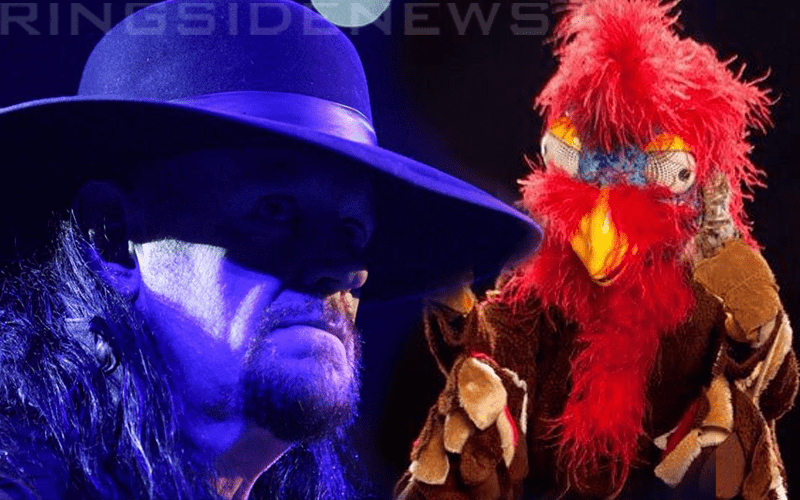 The Undertaker is a WWE legend, but he was almost known as something completely different. It is hard to imagine that The Eggman would have earned a WrestleMania undefeated streak or garnered the same praise as The Undertaker. Lucky for Taker, Vince McMahon changed his mind.

The legend goes that The Undertaker was supposed to be the one popping out of a giant egg that was teased for Survivor Series 1993. Apparently, that is exactly what was supposed to happen as The Dead Man explained to Pastor Ed Young. Thankfully, the Gobbledy Gooker took that role instead.

“This is way back, probably before a lot of you were born—it was actually in 1989. I was working for another company, and they actually told me, as I was going in to renegotiate my contract, they sat me down and went ‘listen, you’re a good athlete, but no one’s ever going to pay money to watch you wrestle.’ They said that to me. I was like ‘really?’ OK, that’s all I needed to hear. We’ll see you guys down the road, and that stuck with me.”

“I eventually get a meeting with Vince, and I was like ‘I’m going to walk in here, and I’m going to blow him away. I’ll get hired right on the spot.’ I go to Connecticut and I meet with Vince, and at the end of it he goes, ‘well, we really don’t have anything right now. Maybe after Wrestlemania, we might have an opening.’ And I was like ‘oh wow. I already quit the other place.’ I didn’t figure that part in [that WWF wouldn’t hire me.] I’m just hanging out, trying to get bookings where I can, and all of the sudden they start this promotion where they’ve got this giant egg on one of the stages. At that point I had short hair, and I had started growing my hair, so I started having this whole drama in my head like ‘oh man, I’m going to be Eggman’ or something like that. He’s going to want me to shave my head and my eyebrows; I was just in a panic. This [egg on the stage] had nothing to do with me.”

“I’m at home one day and the phone rings, so I pick it up and [the voice says] ‘Hello, is this The Undertaker?’ So I put the phone down [puzzled] and think to myself ‘Undertaker? I’m sure not Eggman or Egghead.’ So I say ‘yea, this is The Undertaker!’ I was probably on the verge of an ulcer. I was so uptight about this that it took me a second to even process who this was. Vince’s voice, you can distinguish it pretty quick, and I was like ‘yeah, OK!’”

“He had the character, he just needed somebody big, with no personality. ‘I’m your guy!’’

The Gooker was eventually played by Héctor Guerrero and then written out of WWE’s storylines after a ton of hype to see who/what would be in the egg. WWE actually had big plans for the Gobbledy Gooker that would have created a mascot for children at live events.

Thankfully, they were able to figure out something more productive for The Undertaker to do as he debuted on the same Survivor Series pay-per-view in a much different role.