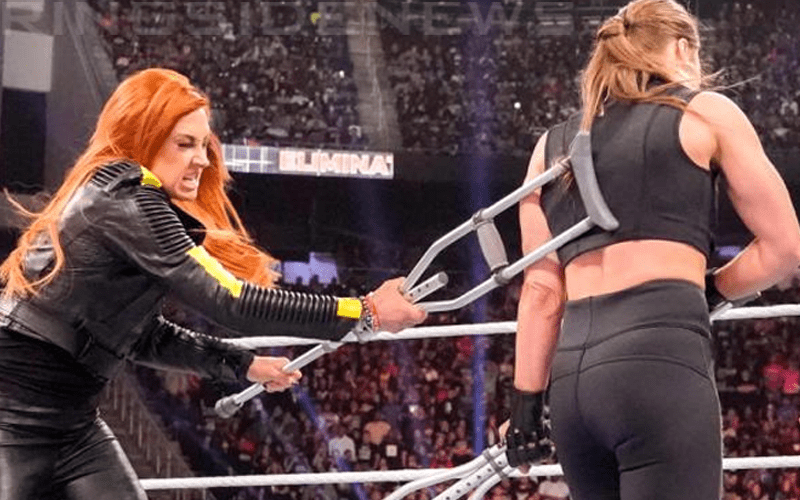 Ronda Rousey has a way with words. She doesn’t appreciate her current WrestleMania program and had an earful for Stephanie McMahon this week on RAW before laying down her title and walking away.

This did not stop the fact that Becky Lynch was “arrested” on RAW this week. Of course, they were not real Atlanta police officers as Michael Cole said and if you’d like to know who they really were you can click here.

Becky Lynch recently posted a mug shot and then she proposed that WWE Shop make it into a t-shirt because she needs bail money. In the process, Lynch threw a shot at Rousey saying that she’s going to get that title off of the Baddest Woman On The Planet.

Rousey had her own reply and it was pretty scathing as she said:

That’s what I’m trying to do dumbass. You hobbling around trying to be a ginger crutch ninja and taking fake prison photos in the hallway isn’t helping

Sometimes the most biting insults will make you laugh and this one certainly did the trick. To call someone a “ginger crutch ninja,” especially Becky Lynch is pretty hilarious. After all, her weapon of choice has been a crutch on the last couple of occasions and she also fits the bill of being a red head (even though it’s not The Man’s natural hair color).