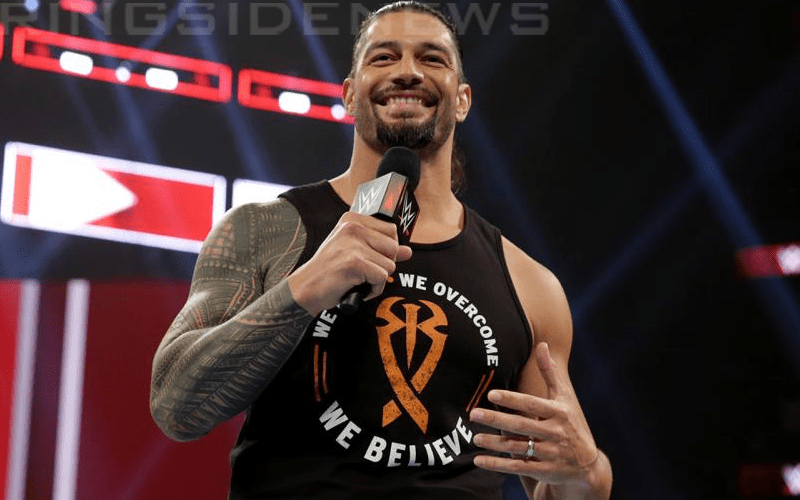 Roman Reigns has returned to WWE after a battle with leukemia. He promised to swing for the fences, but they hit a home run and he was back after just over four months away from the WWE Universe.

If you are under the impression that Roman Reigns faked his leukemia, please click here

Former WWE writer Kazeem Famuyide recently opened up on Twitter to share a pretty amazing story about Roman Reigns. The Big Dog apparently wanted to end a segment with profanity, but that needed permission. After speaking to Vince McMahon about his desire to curse on WWE television, Roman Reigns continued to display his level of locker room leadership, even with a new member on the writing team.

Quick Roman story, the first time i was ever writing for Roman on the road i was sitting with him to produce a backstage segment with Charly. It was some decent copy, but I’m new and knew handling Roman was a big responsibility.

So we’re going through the copy and Roman wants to end the promo with a certain curse word. I’m still under the impression not to use curses because “god damn, don’t be so crass…” so Roman says “I’ll go ask Vince, real quick.”

Roman goes, gets the okay, comes back to me and I say “man, thanks. I know they’ll nail my ass if that didn’t get cleared and you’re way more important to this place than I am” lol Roman doesn’t even blink and goes…

“Nah, bro. Everyone here is important. I’m just a member of the team like you and i wouldn’t hang you out to dry like that.” Mind you, i might have had two whole convos with dude up until that point and he went out of his way to make sure i didn’t catch heat

And that’s who he is to everyone. It probably doesn’t mean a whole lot, but it’s the little things like just being a solid dude and looking out for anybody who is around him that makes him a real leader, and when he was gone you can feel his presence even more

That’s about it, but Roman is dope. I’m glad he’s getting his flowers and a second chance to truly be appreciated for the talent and person he’s carried himself to be

Roman Reigns’ return means a lot to fans of WWE, but it also means that the WWE locker room has their leader once again. Hopefully, he will be able to continue going strong and fight for the success of WWE both on and off screen.