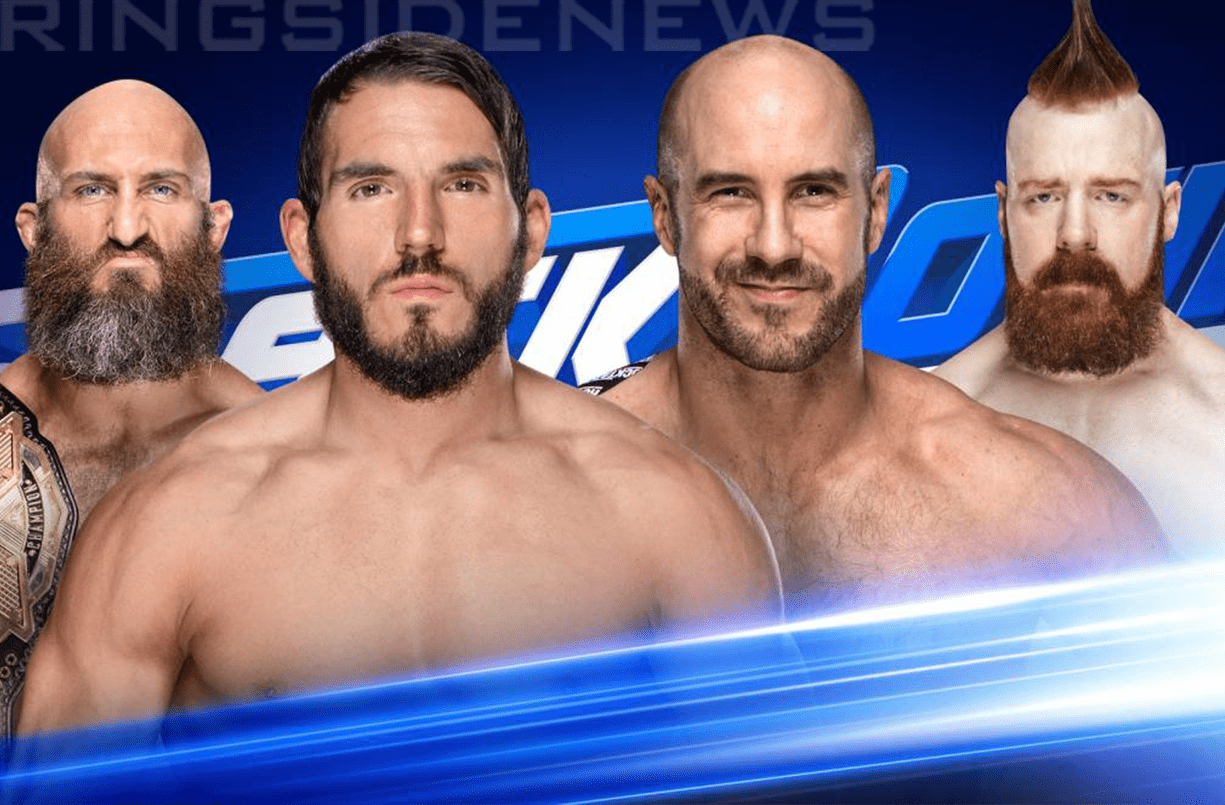 WWE has some ground to cover before Fastlane and then it’s right on to WrestleMania. Daniel Bryan and Kofi Kingston are booked for a contract signing, but there is so much more planned as well.

The new NXT call-ups are still appearing on both shows so Johnny Gargano is going to face Cesaro in a dream match. We have wanted to see that in WWE for a long time.

Aleister Black and Ricochet are looking to keep their momentum going after defeating The Revival in a non-title match on RAW last night. Those two new NXT call-ups will be facing off against Rusev and Shinsuke Nakamura. Lana had a lot to say about that.

Then we have Asuka as she is still without a Fastlane opponent. Mandy Rose is right at her heels for a title shot after defeating the SmackDown Women’s Champion clean last week in a non-tile match.

All that and more is expected to be packed into the two-hour broadcast. So come back at 8:00 PM EST when all the action starts.

The show started with the contract signing already going in a manner of speaking. Stephanie McMahon and Shane McMahon were in the ring with Rowan and Daniel Bryan who was “sitting in a leather chair,” as Steph put it.

Then they started putting Kofi Kingston big time. The crowd chanted, “Kofi!” and then Shane gave us a rundown of Kofi’s career including his debut 11 years ago and his many Royal Rumble performances where he avoided elimination and his title reigns. Each achievement received a little video package. They are really going all-out to push Kofi Kingston.

Once they built Kofi up like a mega Superstar, they introduced Kofi Kingston who came out with the New Day and Big E’s introduction. Kingston and the New Day got in the but had to get out to run around one more time and the crowd was hyped.

Kofi said after 11 long years it’s happening “!” The New Day incredibly over by association and Kingston got a thunderous “you deserve it chant” from the Charlotte crowd.

As Kingston cut his promo, Daniel Bryan sat in his leather chair with his wooden title looking off at the ceiling looking unimpressed. Kofi said he will beat Daniel Bryan and become WWE Champion before setting down to an ovation of “Kofi” chants.

Daniel signed his contract and then Mr Kingston “cemented his legacy officially” as Shane McMahon said. Before he could could put pen to paper, Vince McMahon’s music hit and he looked happy.

McMahon applauded Kingston and let the crowd sing his entrance song at him for a bit. Then Vince McMahon told Kofi how he appreciated everything he has accomplished within the past 11 years, however, it is important to give the biggest box office he can… so he’s replacing him. He said he is replacing him with someone more qualified

Then he brought out Kevin Owens who signed the contract instead.

Backstage, Kevin Owens said he knew that neither McMahon child knew about this change. Then he proposed a match tagging with Kofi vs Daniel Bryan and Rowan.

The Bar were standing in the ring and waiting on an opponent. Johhny Gargano was promoted to face Cesaro, but that did not happen.

The Hardy Boyz came out instead!

The North Carolina crowd was pumped to see the Hardyz who got off to a very quick start. After taking some abuse, Jeff hit a Whisper In The Wind and tagged in Matt.

He is in great shape and took the punishment to Cesaro with a barrage of moves for a two count. Then he hit an elbow for another two count. Cesaro avoided a Twist Of Fate and Sheamus hit a cheap shot for a two count.

Matt hit a Twist Of Fate on Sheamus and Jeff nailed a swanton bomb for the win.

There was a backstage segment with Ricochet and Aleister Black. Lana walked up to them and started some smack talking. They had replies and it looks like their tag team match is still on for tonight.