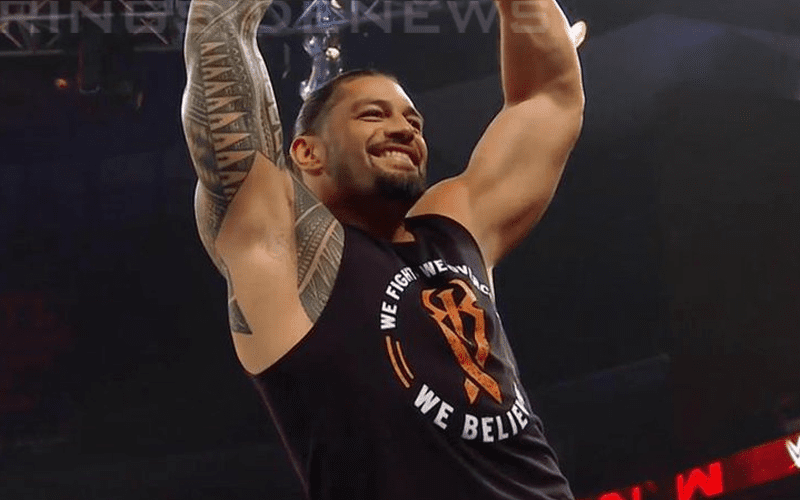 Vince McMahon announced that Reigns would be returning to RAW for the first time since the sad day on October 22nd, 2018 that he had to give up his title and take a hiatus. Since then, Roman has shot a film with his cousin The Rock and also appeared in a Nickelodeon television show.

Reigns started off the RAW broadcast this week and you could tell how much he loved soaking in the loud Atlanta ovation. Reigns went ringside and hugged his family after greeting David Arquette at ringside — yes, that David Arquette.

Reigns said “Thank you” to the crowd and had to wait for the ovation to die down. He said that he misses the WWE Universe because there is no other fan base like them. Then he took a moment as the crowd chanted, “This is your yard.”

Then Roman Reigns said that “this is our yard.” He said that he is a man of faith and took a moment before saying that he was scared and insecure before his October announcement. He didn’t know if he wanted to share that secret with the world which received a bit of a boo from the crowd.

Then the crowd picked back up with the “Roman” chants. He didn’t know how the WWE Universe would react. The response was amazing and everyone was surrounding him with their love and support. He said so many people were praying for him that “God’s voice mail was full.”

Roman said that he can do anything with that type of strength and love. He said the only thing that is important is stepping in the ring every night. He said if he can do that he will use WWE’s platform to support those who were in need just like he was.

Then he got to the update. He said that he didn’t just swing for the fences, a home run in his recover. Because he is in remission from leukemia and the roof blew off of the building.

That being said, “THE BIG DOG IS BACK” he said as he received a huge ovation and “Welcome back chants.”

Then he said thank you again before closing out the segment. As he left up the ramp, Seth Rollins came out to hug him on the ramp.