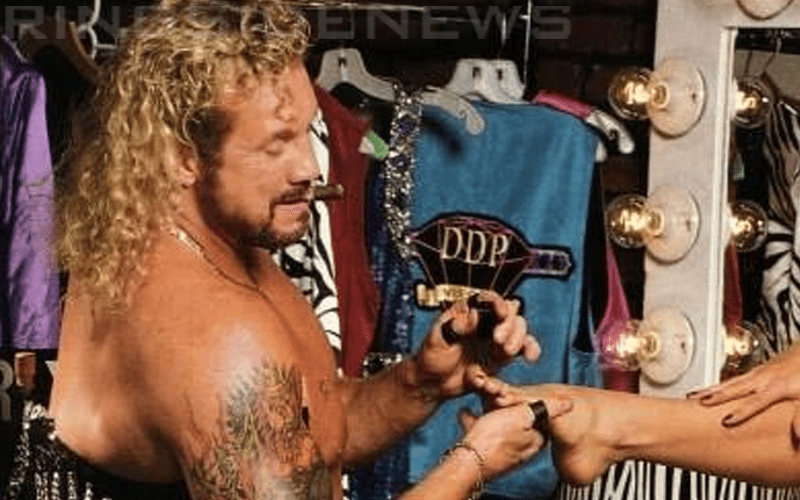 Sometimes it is best to double check what you are going to do with your company before you do something. DDP almost learned this the hard way after appearing in Playboy with Kimberly.

While on Talk Is Jericho, DDP revealed how Kimberly Page’s Playboy photoshoot came about. He didn’t see anything wrong with participating either. However, there was a morals clause in his contract that might have seen otherwise.

“So [Kimberly] was in four different [Playboy] issues, right? They call her up and they say that they want to do a book called ‘Celebrity Nudes’ and since she was on TV with me coming to the ring, so they say they want her ‘and your husband’. So I’m like, ‘what do you mean me?’ So she said, ‘they want to do something where you’re getting ready in the ring and I’m just about to pull up my dress, you’re painting my toenails, fun shots like that.’ It’s supposed to be two pages. So we’re supposed to be in a two-page spread, and they see it and they want to shoot more.”

“Now they’ve got me in a towel, smoking a cigar, massaging her, and she’s on all fours in like a cat lift position, but she [has] got nothing on, right? And so I have to tell Eric that this is going to come out. Now, at the time, again, I’m a mid-card guy and I’m figuring, ‘hey, I’m doing it! I’m doing it! I’m doing it!’ And so, I tell him and he goes, ‘are you crazy? You have’ – what it is it when you sign – ‘a moral clause in your contract! They could fire you!’ I’m like, ‘if they end up firing me, bro, maybe then Vince [McMahon] will do something with it.’”

It certainly sounds like a threat to go to WWE in the middle of the Attitude Era over a problem with Playboy seemed like the right move. Nothing negative ended up happening to DDP and he was eventually pushed to event status. It just goes to show that sometimes it’s all about making the right comment in the correct situation.