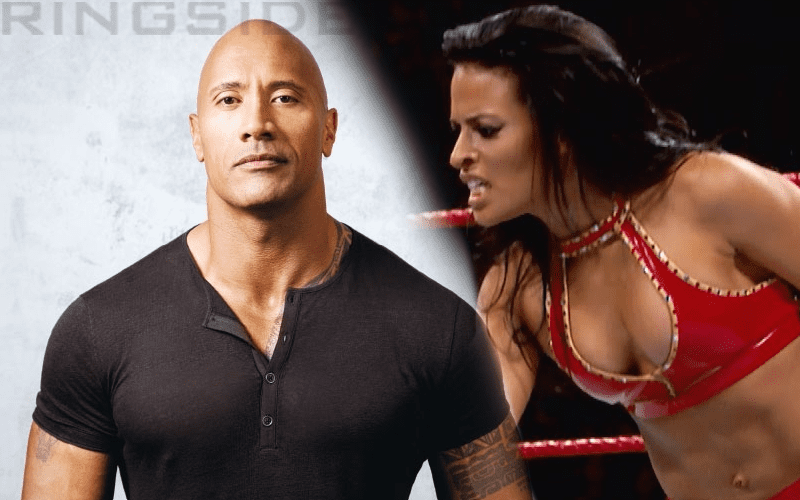 Zelina Vega is on WWE television practically every week as she leads Andrade to the ring. This is a very exciting time in her life because not only did her husband Aleister Black receive a WWE main roster call-up this but Fighting For My Family is hitting theaters where she plays AJ Lee.

AJ Lee and Zelina Vega share a lot in common. They are both into video games and their husbands have a lot of tattoos. While speaking to WWE, Vega explained how much it meant to get this role for Fighting With My Family because of the similarities between her and AJ Lee. She also spoke about how influential The Rock was in her being chosen for this important role.

“Well, I play AJ Lee, the Divas Champion, and it was something that I really found a connection with her because we both were into video games, we’re both a little bit of some nerds. So, it was really easy to just really submerge into her, and become her for that moment.”

“Actually I’ve known Dwayne ‘The Rock’ Johnson for around 5 years now, and I was going through a period of time where I was trying to get to WWE and it wasn’t easy. It took me around 8 years to get here. But at a time where I was struggling to become a WWE Superstar and struggling to become an actress, I texted him one day and I was like, ‘I’m at the end of my rope here, what do you suggest I do?”

Vega revealed that The Rock offered her the role of a lifetime portraying the former Divas Champion and Mrs. CM Punk AJ Lee. She didn’t even have to audition for it.

“[He said] I would love for you to be involved. So I was like, ‘OK, sweet. I’ll probably just get a little scene in the background and that’d be great.’ And he’s like, ‘No, I want you to be champion. I want you to be my Divas Champion. And you don’t even have to audition for the role, it’s yours. I know you can do it.’”

Fighting With My Family is now in theaters nationwide and certified fresh by Rotten Tomatoes. Judging by the way movies are pushed out of their cinema runs you probably need to see it soon because indie films sometimes don’t last too long. When you are watching the movie and AJ Lee comes on screen, try not to yell “Tranquilo” because that would just be distracting.