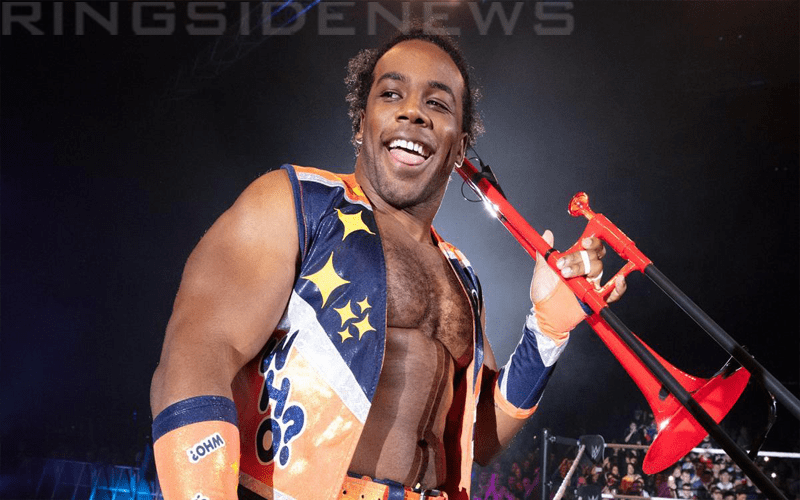 The New Day is popular for a lot of things and one of those great aspects is Xavier Woods’ trombone Francesca II (RIP Francesca I). However, this popular gimmick has a rather interesting story behind it that paints a picture of how things work backstage in WWE.

During E&C’s Pod Of Awesomeness, Kofi Kingston explained how Xavier Woods came out with a cast on one week due to an injury. Kofi Kingston wanted to draw attention to it. WWE wouldn’t let him. He didn’t think this made much sense to no-sell a big foot cast with New Day spraypaint on it, but that was WWE’s decision.

Then at some point between then and SummerSlam which was around three months later, Xavier Woods asked if he could bring a trombone out because he used to play in high school. Apparently, WWE loved that idea.

Woods said WWE responded, “Oh yeah, of course, you can do that.”

The New Day then found themselves wondering how WWE could allow them to bring out a trombone and cut a ridiculous promo with kazoos after rejecting a reasonable request to address Xavier Woods’ injury just a few months earlier.

Kofi also expressed disbelief that the company still lets them do pretty much whatever they like. The fact that there is such planning for silly antics still blows Kofi’s mind like when WWE was arranging their WrestleMania entrance to leap out of a box of Booty-Os.

Kofi said that still to this day he doesn’t know what happened. The New Day can go out and make references to anything they like such as the recent Jussie Smollett scandal or Xavier Woods ending up in a leaked NSFW video with Paige and Brad Maddox and everything seems to get by.

It truly is remarkable what The New Day has been able to do on WWE television. Hopefully, even with Kofi Kingston’s push, The New Day will continue. However, you never know if WWE could be planning a big breakup for them soon enoug.