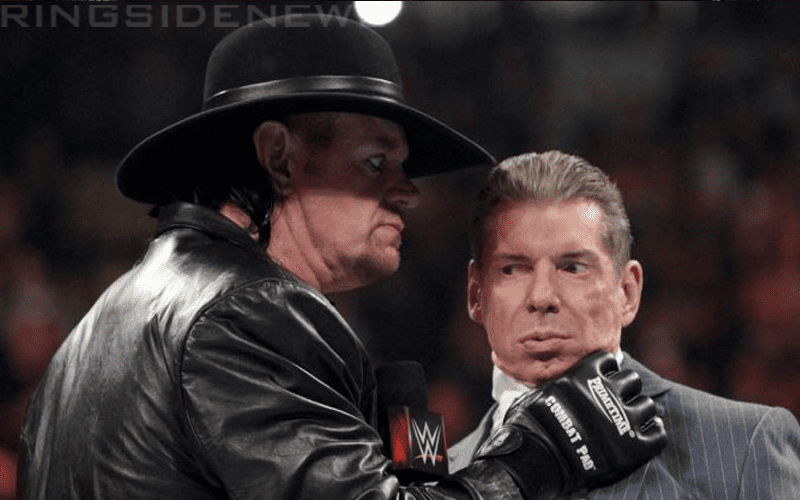 The Undertaker is doing an appearance at Starrcast II which was a big shock to fans. Vince McMahon didn’t take the news well either.

Dave Meltzer explained on Wrestling Observer Radio how Vince McMahon’s constant booking changes as of late could have a lot to do with the fact that The Undertaker situation got to him.

“A whole bunch of things happened in the last week and one of them is whole Undertaker/Vince dynamic, but it had Vince off and because you know there was definite unhappiness about him doing the Starrcast thing and you know why. So there’s that.”

Dave Meltzer later discussed how everyone in WWE is “burnt out” at this point which could explain the constant changes to RAW. To make matters even more complicated, Vince McMahon is concerned about losing one of the biggest names he ever helped create. There is also still the on-going issue of booking a card for WrestleMania.

“It’s not that The Undertaker isn’t on the [WrestleMania] card yet as far as I know, but everything changed. They don’t want the perception. They’re not happy about that thing [Starrcast] and they want him — I don’t know that they want him on the [WrestleMania] card, but I know there’s of Undertaker on the card, but it’s not like there’s a match set up or anything. It’s one of those things where they’re trying to put something together. Everything is in flux.”

“I thought, ‘Oh [The Undertaker’s] just signing autographs [at Starrcast] it’s a way bigger deal to Vince. The whole idea of you , Undertaker’s special to Vince and you know, yeah it didn’t go down well with him at all.”

Of course, WWE would love to have The Undertaker back for another WrestleMania, but what they really don’t need is The Dead Man working for the competition. You can’t blame The Undertaker for taking $60,000 for three hours of autograph signings though.