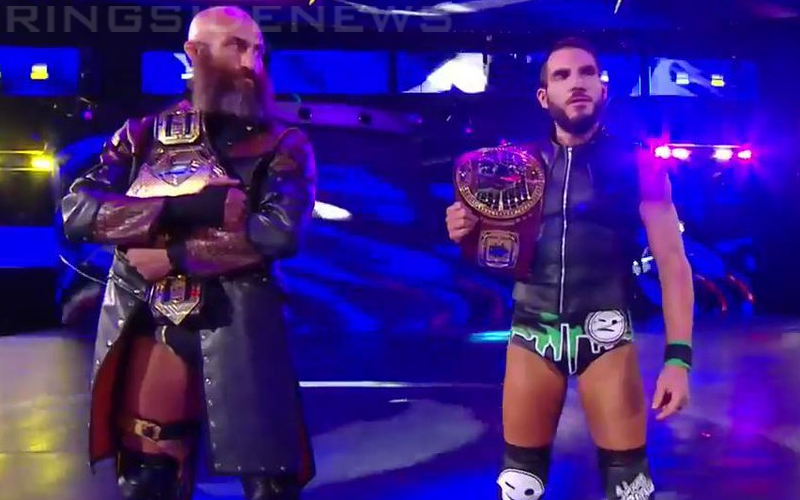 Triple H kicked off RAW this week by giving fans a rundown of events. Then he introduced some people who would make their RAW debut NXT.

It was said that they will be in action tonight and making their WWE debuts. Michael Cole also said, “Welcome to WWE.”

Triple H introduced Ricochet first followed by Aleister Black, Johnny Gargano, and Tommaso Ciampa. Each Superstar got their own promo packages which you can see above.

Later on, Bobby Lashley and Lio Rush jumped Finn Balor and Ricochet ran down to make the save and set up a tag team match. Needless to say, Ricochet had a great chance to showcase his abilities.

Finn Balor took a majority of the punishment from the heels and Ricochet made the hot tag. Ricochet ran a highlight reel all over Lio and Lashley followed by Ricochet getting the pin. Balor might be the new IC Champ, but they were playing Ricochet’s music at the end of the match.

Later on, Johnny Gargano and Tommaso Ciampa battled The Revival in an attempt to recreate their NXT Match Of The Year. Team DIY took The Revival to their limit, but the crowd was mild at best.

To end the match, Team #DIY ended up getting the win as they hit their old finisher Superkick/running knee combo. Needless to say, WWE was putting the NXT Superstars over in a big way.

Finn Balor and Ricochet cut an interview backstage right after that. Balor welcomed Ricochet to RAW. Ricochet said he is living proof of dreams coming true, “If you think you’ve seen the last of me then you are wrong. I’m going to prove to the world why I’m the one and only Ricochet.”

Aleister Black was the final NXT Superstar to make an impression. He decided to wait until Elias was trashing the crowd and the new WWE Superstars. Black also got his entire entrance too meaning they brought that deal that raises him up.

The former NXT Champion got to cut a small promo on Elias saying that he will fade to black. After a short encounter, Aleister Black won with a Black Mass.

These four top NXT Superstars appear to be on RAW and from the way the commentary team spoke about their debuts throughout the show it would appear that this is a permanent call-up for Aleister Black, Ricochet, Tommaso Ciampa, and Johnny Gargano. What happens to Ciampa and Gargano’s championships in NXT remains to be seen.