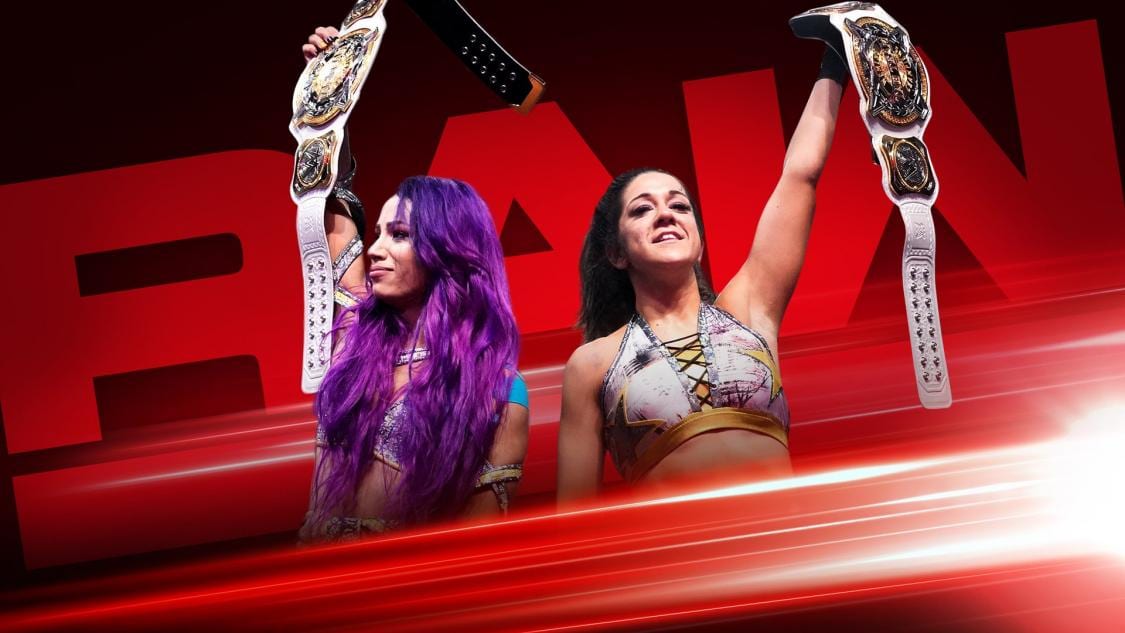 We’re about 24 hours removed from Elimination Chamber 2019, and the event is sure to have some ramifications moving forward toward s Fastlane and WrestleMania. It’s only seven weeks until WrestleMania and another PPV seems like overkill, but let’s not get ahead of ourselves.

Last night Ronda Rousey defeated Ruby Riott in about 1 minute, which was a shame for Riott who deserves better, but also a mercy on the fans who didn’t really need a long match with a foregone conclusion. What happened after was much more interesting, as Charlotte and Rousey squared off, before Becky Lynch reared her petulant child head and beat them both down with her crutches. WWE.Com is teasing further ramifications for Lynch from the McMahon family.

Elsewhere last night, Sasha Banks and Bayley became the first-ever Women’s Tag Team Champions. The duo will celebrate their historic win tonight, as well as probably get their first challengers in the form of Nia Jax and Tamina.

A title that changed hands last night was The Intercontinental Championship from Bobby Lashley to Finn Balor. In what felt like a complete afterthought and rushed decision, WWE decided to toss Lio Rush under the proverbial bus by having him lose to Balor, then get booted to the curb by Lashley. All so Lashley can team with McIntyre and Corbin to face Strowman… again. Why? We probably won’t find out tonight.

Monday Night Raw opens with Triple H stepping into the ring. The Game asks if we can feel the energy of WrestleMania in the air. He runs down what happened at Elimination Chamber, including discussing Becky Lynch’s attack on Ronda and Becky. He says, corporately, he must say if she does that again she will be going to jail. However it was pretty damn cool.

Speaking of which, it was announced earlier today that D-Generation X will be inducted into the Hall of Fame, which is him, Shawn Michaels, X-Pac, Road Dogg, Billy Gunn, and Chyna. He says if that was exciting, just wait. Because he is also in charge of NXT, and tonight we will see the debut of several NXT Superstars, including Ricochet, Aleister Black, Johnny Gargano, and Tomasso Ciampa. Unfortunately the fans in the arena seemingly could not care less about NXT. He says the NXT motto is “the future is now”, and tonight we will get a glimpse of that. However right now there’s about to be chaos, because we’re getting a tables match between Baron Corbin and Braun Strowman!

The bell rings and Braun runs across the ring to grab Baron but his ribs hurt. Braun clotheslines him over the top rope to the floor, then follows after.

Corbin beats on Strowman and even rips his shirt off to target the Kinesio tape. Baron kicks the table back out of the ring, then goes outside himself to continue the beatdown on Braun. Corbin drags the monster to the ramp and tries to suplex him but Braun turns it around and suplexes Corbin! Braun gets to his feet the throws Strowman onto the stage, then into the LED wall. Strowman clears the top off of the announce table, and lifts Corbin for a running powerslam, but Baron slides down and shoves Braun into the table gut-first. Strowman falls off the stage and both men are down as we head to the break.

We’re back and Corbin is attacking Braun in a corner. A table is set-up in the opposite corner and Baron tries to throw Braun into it but the monster stops dead in his tracks and clubs Corbin down. Braun lifts Corbin for a running powerslam but Corbin slides off again. Corbin leaves the ring, runs around the corner, and runs back in to attack Braun. During the commercial Corbin attacked Braun with a chair.

Corbin leaves the ring and grabs a Kendo stick, which he uses the stick to beat the ribs of Strowman. Corbin climbs onto the apron and attempts to dive off onto Braun, but the monster uses the steps to swat him out of mid-air! Braun hits Corbin a few more times with the steps before slamming him into the barricade. They get back into the ring and Corbin attempts to do the run around the ring and back in again, but this time Braun caught him and hit the running powerslam through the table in the corner!

As Strowman is leaving after his win, he meets Paul Heyman on the ramp. Braun grabs Brock’s advocate by the throat until Heyman begs him to let go. He eventually lets go and leaves. Heyman walks into the middle of the stage and starts to talk but his throat is sore. He needs a minute, and it’s time for a break.

Later tonight, Ruby Riott gets another shot at the Women’s Championship, and D.I.Y reunite to take on The Revival.

We’re back live and Paul Heyman is on the horn. He says he isn’t surprised by Braun Strowman, because everyone is jealous of Brock Lesnar. He says he is here at his own expense to show us the history of the reigning, defending, undisputed, Heavyweight Champion, the main event of WrestleMania, Brock Lesnar. We’re treated to a hype video for Brock Lesnar, although apparently it was only Part 1.

Paul @HeymanHustle is here to tell the story of a real-life BEAST. #Raw pic.twitter.com/d8SkYSNnKq

Back with Heyman, and he says there’s nothing Seth Rollins can do about Lesnar’s dominance. Heyman asks the fans if they think Rollins can win the Universal Championship – but the crowd tonight is painfully dead. Before Heyman can say much more however, out comes the new Intercontinental Champion, Finn Balor!

Back from the break and we see still images of Finn winning the IC title from Lashley and Rush last night. Live in the arena again and Heyman is gone. Finn says it’s been a while since he’s held a title, but boy does it feel good. He rhymes off a few of his heroes to little cheers from the fans, and says it’s always been a dream to hold this title.

Balor is interrupted by Lio Rush, who comes out looking sullen. Rush says Finn doesn’t deserve to be the Intercontinental Champion, Bobby Lashley does. Lashley then attacks Finn from behind! The Almighty beats Finn around the ring and Rush joins him for the attack. Lashley scoop slams Balor, then Rush hits a frog splash. Balor receives some nice help though from Ricochet! The One and Only runs down, kicks Lashley, then leaps off the apron onto Rush with a moonsault. Ricochet then hits a springboard dropkick to Lashley that sends him from the ring. We’re getting tag team action when we return.

.@KingRicochet is here and ready to even the odds!! #Raw pic.twitter.com/jrloc3mhah