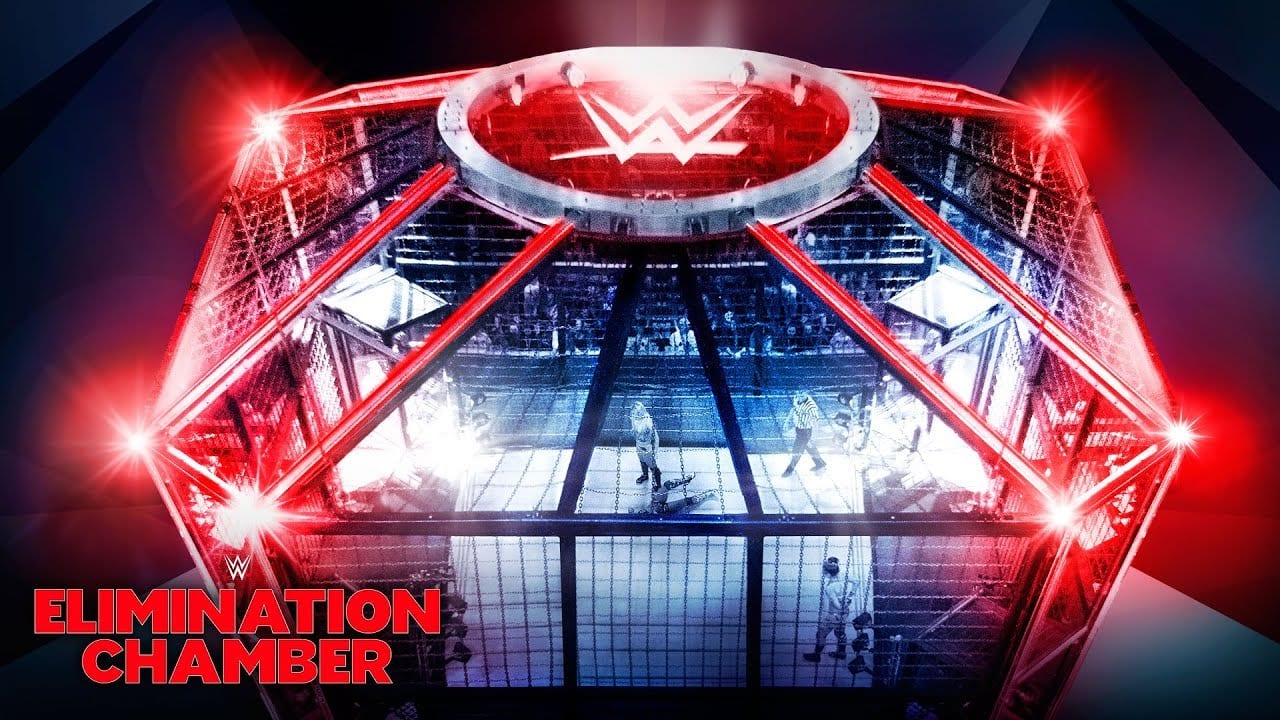 We see Shane getting treatment backstage. Miz apologises to him and Shane says it’s OK. Miz starts to freak out, throwing things and screaming that it isn’t OK because he made a promise to Shane, his Dad, his unborn child and more. Shane tells him to calm down and that he should go home.

Lacey Evans comes out and walks halfway down the ramp…before turning and leaving again.

The men’s Elimination Chamber match begins with the WWE Champion Daniel Bryan and Samoa Joe, while AJ Styles, Randy Orton, Jeff Hardy, and Kofi Kingston are in the pods.

The bell rings and Bryan does his best to avoid Joe. He leaves the ring and runs around. Finally he comes inside and kicks Joe’s leg but Joe no-sells it. Joe then catches a kick from Bryan and kicks him himself. Joe grabs Bryan in a kneebar but Bryan rolls through the ropes to force the break. Bryan chops Joe in the chest but that just angers Joe. Bryan runs out of the ring again but Joe corners him against the fence and chops him silly. Joe gets Bryan back inside and hits him with a powerbomb, into a Boston crab, transitions into and STF, and then a crossface. Bryan rolls backwards to force Joe to break. Bryan dropkick’s Joe in the knee, then tosses him through the ropes.

Bryan slams Joe into the glass of the pod before posing for the fans. Bryan chops Joe back in the ring but the Samoan fires back with one of his own, then kicks Bryan repeatedly. Bryan catches Joe with a drop toe hold into the turnbuckles as the clock ticks down. Kingston is the next entrant and he comes in hot with a springboard chop to Bryan. Kofi hits a frog splash to the back of Samoa Joe for a two count. Bryan grabs Kofi and drapes him across the top rope, then hits a flying knee from the top rope for a two count.

Joe chops Bryan onto his back and turns his attention to Kofi. Meanwhile Bryan climbs the pod and sits down to avoid conflict. Kofi leaps onto the top rope, then onto Bryan’s pod and starts unloading punches. Bryan climbs across the cage to get away from Kofi. Kingston kicks Bryan, while Joe drags the Champion down. Kofi climbs higher before leaping off onto Bryan and Joe! The fans chant Kofi’s name. Kofi ducks and leapfrogs Bryan multiple times before connecting with a flying back elbow. Joe then hits Bryan with a sick running senton, before knocking Kofi down. Joe takes Bryan through the ropes and chops him up against the cage while the clock ticks down.

Entrant number 4 is AJ Styles! And the former Champion kicks Bryan, then Joe, then Kofi. Styles clotheslines Joe down, before slapping Bryan and hitting a springboard reverse DDT/regular DDT to Kofi. Bryan begins to scale the cage but AJ hits him with a Phenomenal Forearm to the back! Back inside the ring, AJ wanted to his the Styles Clash to Kofi, but Kingston escaped. Styles leaves the ring and fights Joe on the outside. Joe whips him into the cage, then hits a back body drop into the ring upon rebound. Kingston starts to attack Joe but gets grabbed with the Coquina Clutch. Kofi flips off the corner to turn into a pin attempt, but Joe didn’t fall for it this time. AJ came from out of nowhere with a Phenomenal Forearm to Joe and that’s that! Samoa Joe Eliminated.

Jeff Hardy is now a part of the match and he takes the fight to AJ Styles in the middle of the ring. Hardy hits Kingston with a sit-out suplex, then hits Poetry In Motion over the ropes onto Daniel Bryan. Hardy looks for Twist of Fate on AJ but gets caught with a Pele Kick. Bryan and Kofi brawl on the outside, meanwhile Hardy and Styles are fighting on the top rope. Hardy knocks Styles off and to the floor, meanwhile Bryan is bending Kofi’s arm through the chains. Hardy hits AJ Styles with a Swanton Bomb as he laid across the top turnbuckles! However Daniel Bryan capitalised with a running knee to Hardy and pinned him. Jeff Hardy Eliminated.

Bryan gets Styles in the tree of woe and kicks him over and over. He then grabs Kofi and places him on the ropes above Styles. He climbs up top as well and looks to suplex Kofi, but AJ German suplex Bryan as well! All three men are down and here comes the Viper. Randy stalks all of them, and attacks Styles in the corner. He clotheslines Kofi and floors Bryan, before stomping away at Styles again. Randy tosses Kofi into AJ in the tree of woe. Bryan grabs Orton with a backslide but the Viper kicks out. Orton drops AJ across the top rope, meanwhile AJ caught Kofi with a backbreaker. Styles looks for the Phenomenal Forearm to Kofi but Orton grabbed him and hit the RKO for the pinfall! AJ Styles Eliminated.

UNBELIEVABLE.@RandyOrton just caught @AJStylesOrg with ANOTHER #RKO, and we’re down to THREE in the Elimination Chamber! #WWEChamber pic.twitter.com/t7X4rvfbma

Kofi tried to roll Orton up but to no avail. Kofi climbs the ropes but Randy grabs holds of him for a draping DDT. Orton poses and readies the RKO but Bryan ran at him so Orton hits a snap powerslam. Kofi then comes from nowhere with Trouble In Paradise and Orton is done! Randy Orton Eliminated.

The fans are coming unglued in favour of Kofi Kingston as he and Bryan stand in opposite corners. They meet in the middle and throw wild hands and kicks. Kofi gets fired-up and asks for harder kicks. He looks for Trouble In Paradise but Bryan ducks it and kicks the knee out. Bryan hits the Yes! Kicks but Kofi ducks the last one and hits the S.O.S for a near-fall!

Bryan dodges a splash in the corner, then Bryan tees-off on him in the corner. Bryan kicks away at Kofi, before hitting four running dropkicks. He looked for the fifth but Kofi burst out of the corner with a double stomp to the chest for another near-fall. Kofi gets to his feet and wants Trouble In Paradise again but Bryan rolls out under the bottom rope. Kofi chases after Bryan and slams him into the chainlink fence. He looked to run Bryan into the pod but the Champion tossed him off and into the glass hard.

KOFI KICKED OUT. WE REPEAT. @TrueKofi KICKED OUT!

Bryan rolls Kofi back into the ring, then hits Kingston with the running knee…. but he kicks out! Bryan can’t believe it and the fans are loving it. Bryan grabs Kofi’s arms and stomps his head for another near-fall. Bryan runs for the knee again but Kofi hits Trouble In Paradise and the Champ kicks out! Bryan gets Kofi in the Omoplata but Kofi reached the bottom rope to force the break. Bryan goes to the top rope but Kofi kicks him, then climbs up with him. Bryan climbs to the top of the pod but Kofi follows and slams him against the glass. Kofi lifts Bryan up and looks for a superplex off of the pod but Bryan turns him around and slams him against the glass. Bryan begins to climb down but Kofi kicks him in the head and he falls to the mat. Kofi jumps off the pod with a splash but nobody’s home! Bryan hits the running knee and that’s all she wrote!

Bryan leaves the Chamber with his title and Erick Rowan after the win. Big E and Xavier Woods come running down and help Kofi to his feet. They hug him as the fans chant “thank you Kofi!”

Kofi slaps his chest in appreciation of the fans. The New Day pose for a moment before leaving the Chamber together. They stand on top of the ramp to close out the show.

What did you think of Elimination Chamber? Let us know in the comments and be sure to come back tomorrow night for the official start to WrestleMania season! Until then, safe travels.