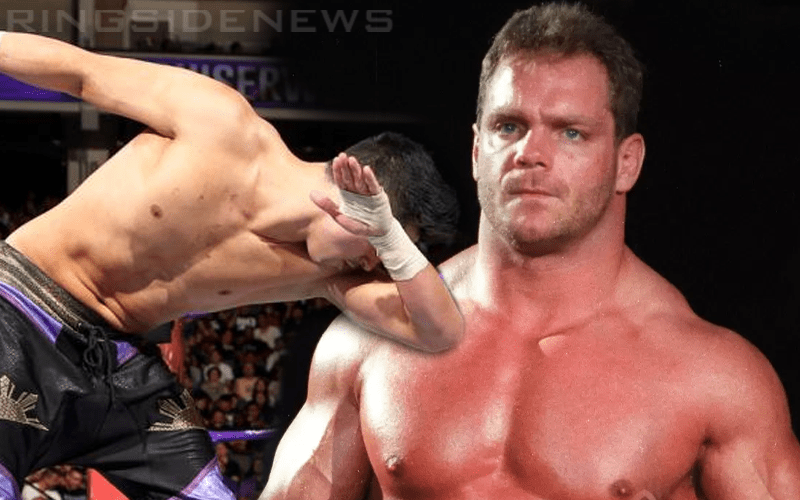 Not all WWE Superstars start their careers in the Performance Center. TJP wrestled all around the world before coming to WWE. He also spent some time in Japan and learned a lot in the process. This included how to and where the comfy spot is in Chris Benoit’s bed.

TJP recently appeared on the ‘Wrassle Rap’ podcast where his time in NJPW came up. He had to start from the bottom, and now he’s in WWE — but it wasn’t easy at all training in New Japan.

“Yeah I did [sleep in the dojo]. They also shipped me off to Tokyo whereas the other guys, they may have spent another night or two in the dojo in Tokyo just if they arrived the day before a tour and they didn’t go to a hotel or something like that, but I actually had to go and be in the dorm rooms in Tokyo. I slept in Chris Benoit’s bed.”

“I was in those dorm rooms and I would sweep the floors and help cook the meals. Thankfully, one of the young boys in my class, [Inzowa] was his name. He wanted to be . He didn’t really want to be a wrestler, he was just wrestling. So thankfully he cooked most of the meals because he loved cooking so I didn’t have to do that.”

“But I’d sweep floors and wash Nakanishi’s back, Liger’s back, carry their bags. I did all that stuff. The other guys really didn’t have to do that sort of thing. If I had to go on tour, they would ship me out a month early, two weeks early and I would live in the dojo. Sometimes I would stay there between tours. I’d be there for three months at a time or something like that.”

TJP is enjoying his life as a WWE Superstar, but he will never forget his time training the hard-knock strong style in Japan. Washing Jushin Thunder Liger’s back has to be pretty memorable as well.