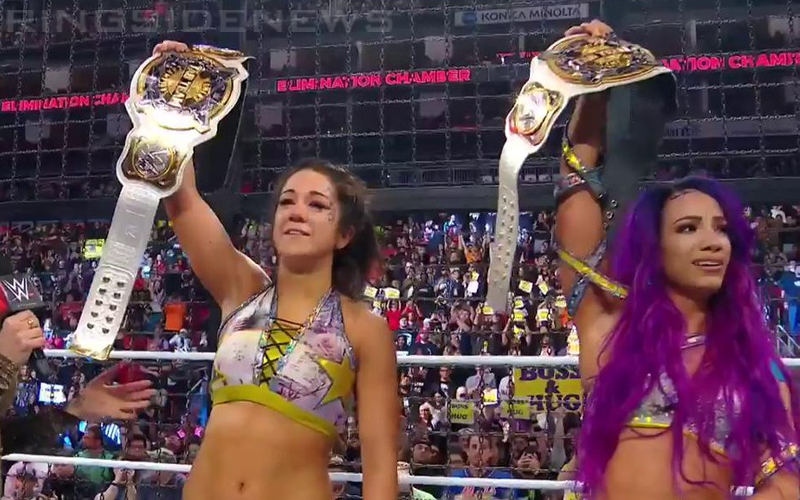 WWE’s Elimination Chamber pay-per-view was held in Houston Texas this year and the Toyota Center was primed for six title matches during the night.

Carmella & Naomi, The IIconics, The Boss n Hug Connection, The IIconics, Fire & Desire, and Nia Jax & Tamina Snuka were set to make history, but only one team will actually earn a spot in th history books.

In a very funny moment, Corey Graves said that Carmella and Naomi don’t stand a chance and jinxed themselves because of touching the new titles before the match started.

The big story going into this match revolved around Bayley and Sasha Banks. They not only entered last and started out the match, but the narrative was thrown around that Sasha Banks was working with a bum shoulder.

If you would like the full Elimination Chamber results you can get those here.

Naomi & Carmella were eliminated first by the IIconics. Then Nia Jax & Tamina laid waste to the IIconics and eliminated them after dueling Samoan drops.

The Riott Squad pulled off some impressive moves including dueling dives off the chamber pod. However, they were no match for Nia and Tamina who eventually eliminated them as well.

Nia Jax took herself out by running through the glass of a pod. Then Tamina took a couple of finishers including Bayley’s elbow drop and everyone pinned her to eliminated Nia & Tamina.

It all came down to The Boss & Hug Connection and Fire & Desire. There were a couple near falls as these two teams gave it everything they had.

Fire & Desire were relentless as they shoved Bayley and Sasha Banks against the unforgiving Elimination Chamber structure, but they couldn’t secure a pin fall time and time again.

Then there was some miscommunication where Deville accidentally speared Rose. Banks locked on the Bank Statement and Sonya Deville tapped out.

The Boss n Hug Connection won the WWE Women’s Tag Team Titles and everyone celebrated to open up the Elimination Chamber pay-per-view.