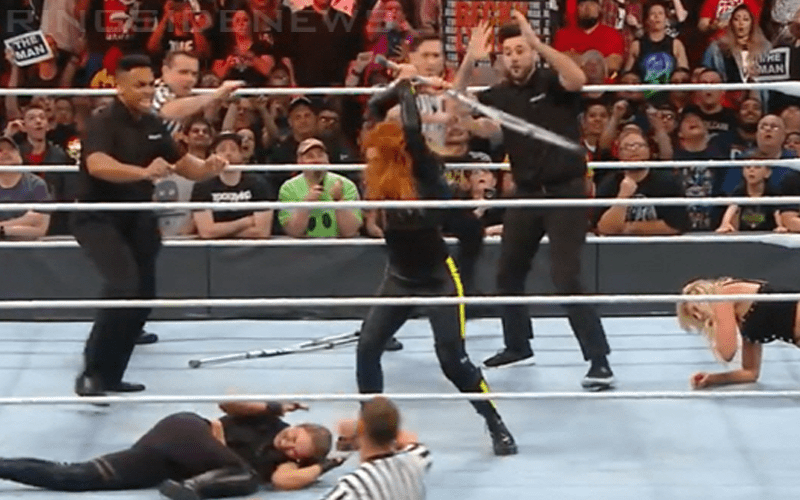 WWE really shook things up at Elimination Chamber. The show started with the introduction of Women’s Tag Team Titles. Then the second match saw new Tag Team Champions crowned once again. To follow that up, Finn Balor became the IC Champion. Then WWE threw even more unexpected action at fans.

The crowd chanted “We want Becky” throughout the short Ronda Rousey vs Ruby Riott match. Then Charlotte Flair got in the ring to join Rousey for a face off.

The crowd started cheering as Becky Lynch walked through the sea of fans walking on crutches. These crutches were due to the beating she took from Charlotte Flair last night. Oddly enough, in spite of being suspended security let Lynch right up into the ring.

Suddenly, The Man tossed one crutch down and started beating Charlotte with the other one. Ronda Rousey stood there motionless and unimpressed as she watched this go down in front of her.

Rousey picked up the other crutch and it looked like there was going to be a crutch fight between The Man and The Baddest Woman On The Planet, but instead, Rousey turned to Flair. Then Lynch started wailing on Rousey with the crutch when her back was turned.

The crowd ate it up as Becky Lynch destroyed a crutch over the former UFC Bantamweight Champion. It looked like Ronda took a shot to the head in the process too as Lynch made some legit connection with those shots.

The security led Lynch off as Ronda Rousey got to her feet and her head was busted open the hard way. Rousey was not happy at all to end this segment.