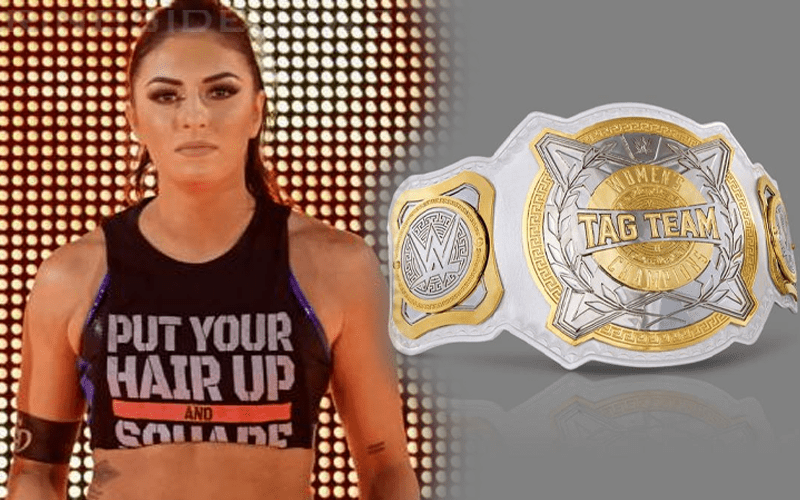 WWE will re-introduce Women’s Tag Team Titles this Sunday which is something fans haven’t seen in the company since the Jumping Bomb Angels’ days. Six teams will compete inside the unforgiving Elimination Chamber structure that has already possibly injured one crew member already.

While speaking to Yahoo Sports, Sonya Deville revealed how she didn’t think WWE Women’s Tag Team Titles were going to happy even with the rumors. Deville came into the WWE Universe with a very minimal amount of professional wrestling experience, but she is always willing to put her hair up and square up to a new challenge.

“Going into this year, we kept hearing rumblings about the creation of Women’s Tag Team titles for so long and didn’t know if it was really going to happen.”

“Now that it is a reality, and Sonya Deville and I are part of it, it’s very exciting because I feel those titles belong to us. We’ve been working our butts off, are the total package and we’re really excited going into this match. The only other two people with experience in the chamber are Sasha and Bayley. We have to watch out for them obviously, but everyone else hasn’t been in this kind of match.”

“I’ve come a long way considering I didn’t have a wrestling background coming into this. I was in NXT for two years, which is a pretty short period of time.  But as I mentioned, I’m always looking to improve and looking to get better. The more you work, the better you get. It’s all about . I think the year between Elimination Chamber matches I’ve definitely improved, especially being on SmackDown Live, and having the chance to work with all of the talented women in WWE. It really makes you grow and become a better performer.”

Fire & Desire have an honest chance at winning the WWE Women’s Tag Team Titles, especially if WWE wants to place the new championships on a heel team.

Only time will tell how long Deville’s partnership with Rose will last, but in the meantime, they seem very focused. Mandy Rose spoke about her previous experience in the Elimination Chamber and how the rules have changed. We will have to wait and see if that experience will pay off on Sunday.