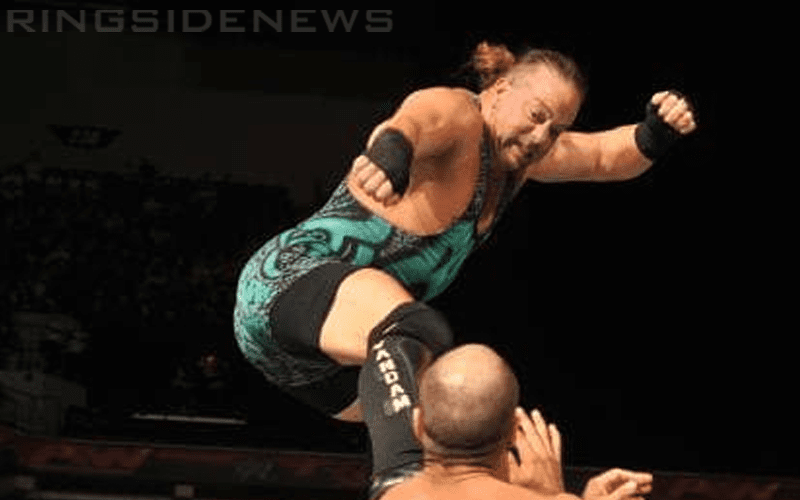 Accidents happen all the time in the ring. Rob Van Dam realizes that fact all too well. While he recently spoke to Apter Chat, RVD discussed one move that caused the injury he feels the worst about.

This move is actually a flying springboard kick and its origin caused an injury the first time Rob Van Dam tried it. Because his first victim was Sabu. After breaking his jaw, Sabu came back for more. It was years later that RVD would do the same move to Abyss and knock his teeth out which is what RVD has the most remorse over.

“Sabu, he’s always been crazy too. I asked Sabu one time; we were in the ring and [The Original] Sheik wasn’t there for whatever reason and I was already a martial artist, kickboxing at that time. I said, ‘I’d like to do this move where I do a springboard off the second rope.’ I probably didn’t know it was a called a springboard but anyway, the one where I do the back jump out of the corner and I kick the guy in the face, and I was telling Sabu that I think that would be a cool move and he goes, ‘Okay, try it.’

“I was like, ‘Yeah, I know how to kick you really hard, knock you out, but is there a trick or something? Like do I aim somewhere else?’ He goes, ‘Just do it, and try not to break my jaw,’ and I was like, ‘I don’t know. I don’t feel that comfortable.’ He goes, ‘No, no. You’re good enough. You got good control and if you do break my jaw, when it heals,’ he said ‘then we’ll try it again.’ I was like, ‘Okay,’ I bounced off the rope, bam. Broke his jaw.”

“He’s eating through a straw for the next four or five, maybe six weeks, and then , he got in the ring just like he said. He said, ‘Do it but try to pull it back some.'”

“With that very same kick, I knocked Abyss’ teeth out in TNA which is one of the injuries I feel the worst about.”

Rob Van Dam has been through plenty of wars, but knocking someone’s teeth out is something you don’t really forget. It just goes to show that you never know what can happen in a pro wrestling ring. This is especially true if RVD is serving up still kicks.