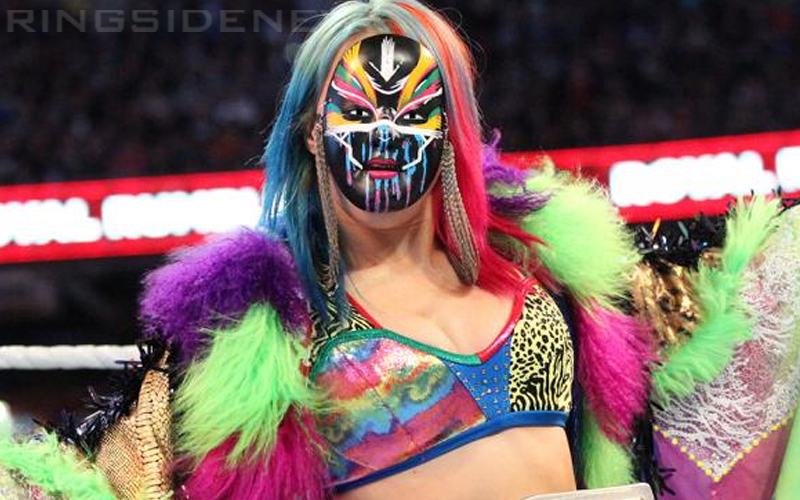 Asuka tapped out Becky Lynch at the Royal Rumble event and then she ghosted SmackDown Live after that. The SmackDown Women’s Champion has disappeared and she does not even have a match this Sunday at Elimination Chamber.

With the WWE Women’s Tag Team Titles set to be defended in Houston at the Elimination Chamber pay-per-view, finding an opponent for Asuka might have been difficult. She could have faced Zelina Vega or Lana, but it was decided for Asuka to simply sit out of this one.

According to Dave Meltzer during Wrestling Observer Radio, WWE isn’t even sure about The Empress Of Tomorrow’s WrestleMania opponent as names are still being pitched backstage.

“Asuka’s not even on the card [at Elimination Chamber] so whatever she’s doing at WrestleMania and nobody knows that right now. Because I mean, people are pitching for that one. Who knows how that’s gonna end up?”

Asuka should have a WrestleMania moment. It is only fair. Her amazing undefeated streak was broken by Charlotte Flair at last year’s show of shows and now Asuka is SmackDown Women’s Champion.

Hopefully, WWE will be able to figure out a place for Asuka at WrestleMania and make it count. However, the women’s focus on the WrestleMania card certainly seems to be drawn to the RAW brand and Ronda Rousey’s on-going situation with Charlotte Flair and Becky Lynch.