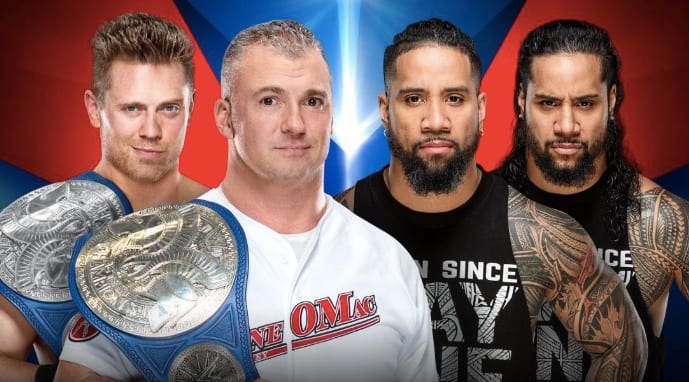 As seen on Sky Bet, the betting odds for Shane McMahon & The Miz vs The Usos at WWE Elimination Chamber have been released.

The partnership of Shane McMahon and The Miz has always seemed a little bit odd in the eyes of the WWE Universe, but such is the nature of professional wrestling. Sometimes, things come along that we don’t necessarily take all that seriously – and before you know it, this ‘thing’ ends up capturing the SmackDown Tag Team Championships.

‘McMiz’ will be going head to head with one of the best WWE tag teams in recent memory in the form of The Usos at Elimination Chamber, but the odds don’t really agree with that ideology.

The odds reveal that Shane & Miz are the overwhelming 1/6 favourites to retain the titles, with Jimmy & Jey being 7/2 underdogs. That seems particularly bizarre not only because of the teams involved, but also because of what people are anticipating will happen heading into WrestleMania.

The expectation seems to be that Miz will turn on Shane, which will lead to a singles match between the two men at MetLife Stadium. Alas, these odds would indicate that isn’t going to be the case, and that they could end up defending the belts once again on the grandest stage of them all.

It certainly seems like there’s a lot of value to be had in betting on The Usos next weekend, if only for storyline purposes.

Either way, it should be a pretty entertaining match contrary to what some fans will lead you to believe.