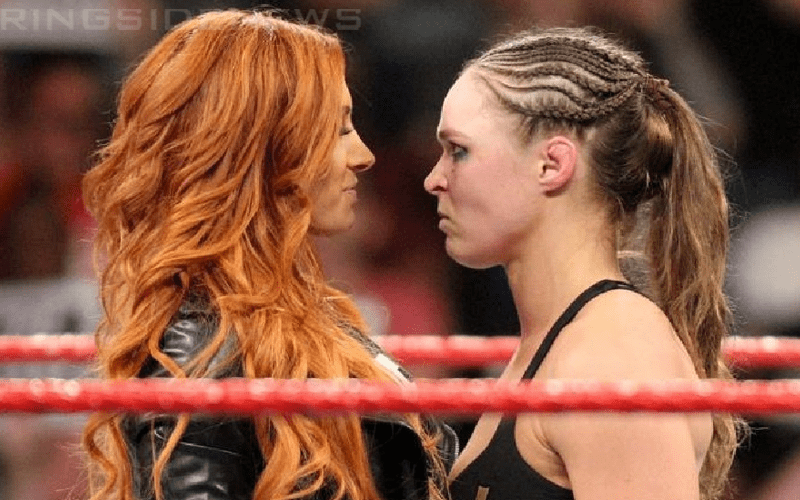 Becky Lynch is all fired up and ready to take on Ronda Rousey at WrestleMania. Of course, even if The Man has a special Mania t-shirt, their match is still expected to be turned into a triple threat match and for good reason.

Becky Lynch and Ronda Rousey have a war going on within the confines of social media too. In fact, that feud might be even more intense than what is on television. The current RAW Women’s Champion fired off with a message to Lynch where she called her out for faking her knee injury (SPOILER: Becky Lynch’s knee injury is fake).

“You stayed out too late last night but have an exam this morning? You faking a knee injury but have #Wrestlemania looming in your future? Whenever you need to suck it up and handle business, I personally prescribe this shirt to ease your pains, b*tch!”

Becky Lynch didn’t like hearing this one bit. In fact, she had a reply almost immediately after reading this shot from Ronda Rousey. The Man said she is sorry for all of the “Twitter murder lately,” but you could tell that she didn’t mean it at all.

“I’m sorry for all the Twitter murder lately, Ron Ron. You’re so proud of line that you made a little tee shirt page. Awww. Give The Man one so people will actually know it’s out there.”

Ronda Rousey decided to clap back at Lynch, but she did it on another tweet from The Man where she talked about being on RAW this week.

“I’ve had 7 knee surgeries and no one’s ever seen me limp. #IceAndAdvilBitch”

Becky Lynch fired back with a biting reply. She straight up took a shot at Ronda Rousey’s losses in the Octagon that both left her limping a considerable bit.

“Pretty sure everyone has seen you limp at least twice.”

This was a pretty great shot to fire from Becky Lynch. Although WWE is considering The Man facing another top name around SummerSlam, things are still heating up plenty between Ronda Rousey and Lynch as they roll down the road to WrestleMania.