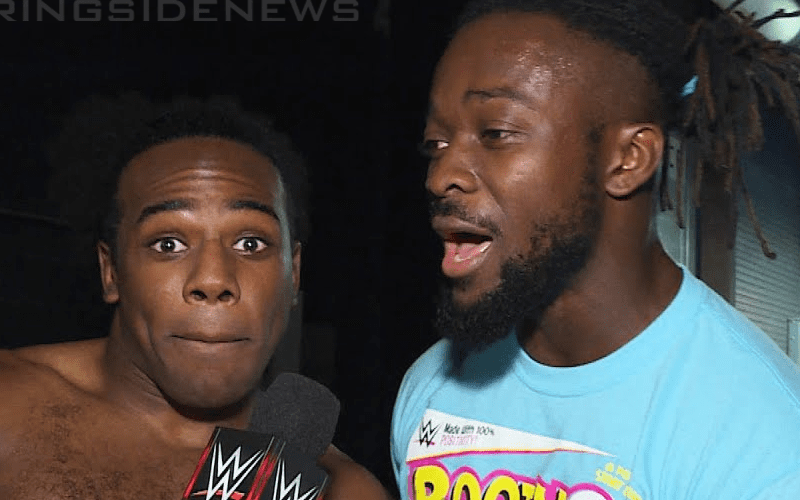 Vince McMahon can be set in his ways at times, but he loves a good bet. McMahon will see someone one way and it is nearly impossible to change his mind. This was the case with Kofi Kingston because McMahon only saw him as a Boom Dropping babyface.

Xavier Woods recently spoke to Corridor Cast where he discussed the formation of The New Day. Vince McMahon didn’t believe they could get heat because they were supposed to be heels. This is when Woods made a very interesting bet with Mr. McMahon.

“When they let us make the group, we were good guys. For the industry terms, we were baby faces, and we thought we should be bad guys, heels, and after a while, some things happened and people were chanting, ‘New Day sucks’ and it’s like, ‘Ok, yes. Cool. They’ll let us turn a corner and we can be bad guys now.’

“They thought that since Kofi had been a babyface for so long that they wouldn’t boo him, and so, to me, I was like, ‘No, we’re in control of that. I guarantee you…’ I went to Vince McMahon and I was like, ‘If you give us… if you give me a microphone four weeks in a row, I guarantee you that they’ll boo Kofi Kingston, and he was like, ‘You really believe in this that much?’ I said, ‘Yes, I believe that I can do it’, and he goes, ‘Four weeks? And if you don’t do it in four weeks then what happens?’

“I said if I don’t do it in four weeks, you’ve got 60 dudes in developmental that deserve this spot more than I do, [and Vince is like], ‘I can send you home? Get ready’, and I said, ‘You should if I can’t do it. If I can’t make good on this then I don’t deserve to be here’, and he’s like, ‘Alright’.”

Obviously, the bet worked and The New Day drew some massive heat with the crowd. Now they are a mainstay in WWE with no signs of splitting up. You never know when Vince McMahon might decide to do that, but maybe all it would take is another friendly wager with The Chairman to change his mind.