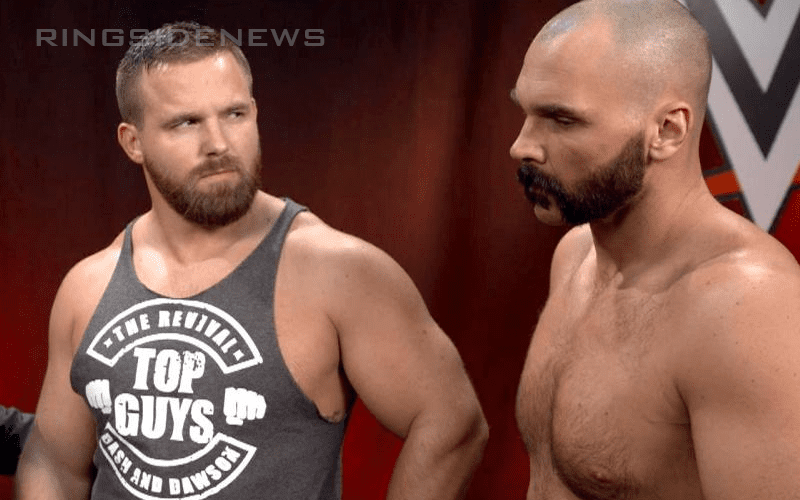 The Revival is currently unhappy in WWE if all reports are correct from various sources. They asked for their WWE release and put a copyright on #FTR which gave fans a huge hint that they are making plans.

Bryan Alvarez discussed The Revival’s current situation during Wrestling Observer Live and why Scott Dawson tagged with Rezar of AOP to face Bobby Roode & Chad Gable instead of keeping The Revival together.

“Here’s the thing everyone, I don’t know what’s happening right now, okay? But I know that… I think something’s going on. Something storyline wise. Because alright, so last week they set up Revival vs Zack Ryder and Curt Hawkins. The moment I saw it I thought, okay they’re doing some kind of story here where like Hawkins is going to beat The Revival and his losing streak is going to end and it will be at the hands of The Revival and everyone knows that The Revival wants out so they’re either going to be buried or they’re going to be buried in real life and storyline.”

“They’re going to be buried in for some reason, but something is going on. So then at the Rumble one of them [didn’t wrestle] like that makes no sense why is one of them gone? And then there was the thing with Ziggler like Ziggler’s out of here his contract is expired he’s doing his comedy show, he’s not going to be at the Rumble he’s talking about how he doesn’t want to be a producer at this stage in his life.”

“Like they build this up big like he’s done, of course [Ziggler] shows up in the Royal Rumble, so now I 100% believe that they are doing an angle with The Revival. I don’t know what it is, but I think we’re going to find out more tonight.”

“It’s a storyline, there’s some kind of weird storyline going on here.”

We will have to wait and see what is happening with The Revival. This is a very interesting situation because reports have been confirmed all over after Cassidy Haynes of Bodyslam.net broke the story about them asking for their release.

Alvarez seems to think that WWE is doing a storyline, he didn’t address Dash Wilder’s cryptic tweet following the Royal Rumble kickoff show match he sat out on though.