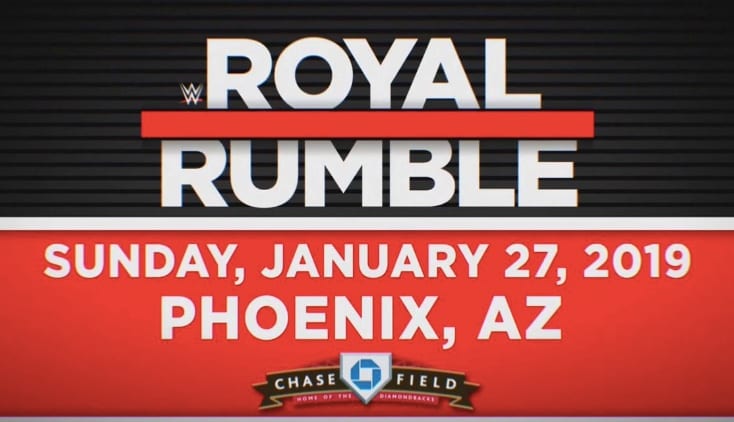 The 2019 Royal Rumble from Phoenix, Arizona, kicks-off with the SmackDown Live Women’s Championship Match! And out first is the challenger, The Man, Becky Lynch!

THE MAN IS HERE.@BeckyLynchWWE has one goal, and that’s WINNING the #SDLive #WomensTitle to kick off @WWE #RoyalRumble! pic.twitter.com/Zz123wFchJ

The match gets underway and they start things off with an aggressive lock-up. Becky hits a shoulder tackle but Asuka fires right back with a dropkick that floors The Man. Lunch gets back to her feet and punches the Champion in the mouth. Lynch yells at Asuka to fight her. Asuka connects with some kicks and a snapmare. She shoves the face of Lynch, who gets angry and delivers some stiff elbows to Asuka’s face, as well as a flying forearm.

Asuka rolls from the ring to regroup. Becky chases her outside but Asuka slides back in, then knocks Becky from the apron with a hip attack. Asuka gets onto the apron and Lynch meets her there and connects with a kick to the chest to knock the Champion to the floor. Becky slams Asuka’s head into the apron, but then Asuka fires back and does the same to her. Asuka tosses her into the barricade, then the ring LED board. Lynch then counters with a Bexploder into the barricade.

Lynch gets Asuka back in the ring for a two count. She hammers on the Champion in the corner until the referee stops her. A suplex from the challenger for a two count. Lynch begins to work on the arm to prepare the Dis-Arm-Her. Asuka looks for a hip attack against the ropes but Becky moves, leaving Asuka hanging there, however the Champion grabs her and applies the Asuka Lock through the ropes! She is forced to break the hold at 4. Lynch then dodges Asuka, sending her shoulder-first into the ring post, so Lynch grabs the arm and applies the Dis-Arm-Her over the top turnbuckle. Again the referee count stops it.

After kneeing Becky in mid-air, Asuka starts to fire up and hits a dropkick from the top rope, as well as a German suplex. A hip attack scores a two count. Asuka takes to the top rope for another dropkick but this time Lynch moves, and hits a Bexploder for a two count. Asuka grabs Becky from out of nowhere with an armbar, but as Becky tries to escape, she transitions to the Asuka Lock. Rope break from Lynch and both women are now on the apron. Asuka gets Becky trapped in the ropes and unloads with forearms to the back. Lynch looks for the Bexploder on the apron but Asuka fights it off. Asuka grabs Becky and hits a twisting fisherman suplex to the floor but she didn’t full commit to the spin and they both landed on their sides.

Lynch just beats the count before 10 but Asuka kicks her in the head for a two count. Both women get to their feet and unleash slaps on each other, until Asuka connects with a roundhouse kick for another near-fall. Becky hits Asuka on the top turnbuckle and hits a super Bexploder! Asuka kicks out! Becky drags Asuka over to the ropes and climbs up top,looks for a senton but Asuka moves. Asuka gets Becky in the Dis-Arm-Her but Becky escapes and gets the Champion in the Asuka Lock! They separate and Becky finally gets the Dis-Arm-Her on but escapes, they exchange reversals, then Asuka gets the Asuka Lock in and Lynch taps!

Lynch sits on the apron afterwards, looking angry with herself. Asuka celebrates with her title.

STILL THE EMPRESS of #SDLive.@WWEAsuka just made @BeckyLynchWWE TAP OUT to kick off #RoyalRumble! pic.twitter.com/uRqGaUGRIa