Christian predicts that the returning Alexa Bliss will win the Women’s Royal Rumble match. Edge thinks Charlotte will win, unless there’s some big outside interference or “trickery”.

Edge and Christian assume that the Tag Team Title match will open up NXT Takeover on Saturday. The Undisputed Era always set the bar high, and the War Raiders are this generation’s Road Warriors or Demolition. There aren’t a lot of teams like that anymore, so it’s cool to see that style and look in 2019.

Christian says it’s great to see Bianca Belair reach her potential and elevate to the main event picture in NXT. It was easy to see early on that she had the ability to get there, and now here we are. Edge notes that this Saturday’s match against Shayna Baszler should be interesting because this is the biggest match of Belair’s career to date by far.

Edge and Christian welcome Finn Balor to the show.

Balor notes that he wanted to be a wrestler from a very young age. He was inspired by Shawn Michaels as a kid, and by the time he started wrestling he was a big fan of Dynamite Kid matches. His in-ring style was inspired by both those men. 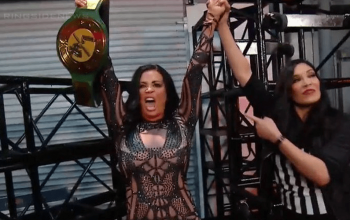