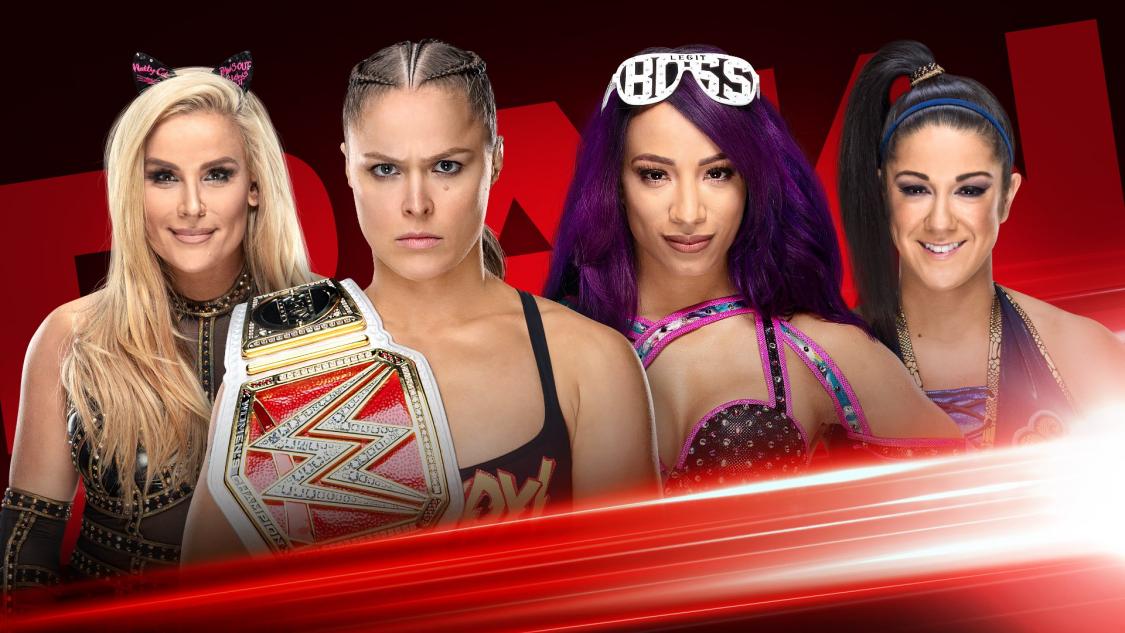 This marks the final Monday Night Raw before the 2019 Royal Rumble. Last week saw the main event of the Rumble change drastically, as Braun Strowman was evicted, and Finn Balor took his place to face Brock Lesnar for the Universal Championship! Tonight Balor aims to prove that he has what it takes to take down The Beast. While Lesnar may not be on tonight’s Raw, Heyman definitely will be to address the new challenger.

After the kerfuffle last week between Ronda Rousey and Sasha Banks, the two pair off with Bayley and Natalya for a tag match, ahead of their big showdown at the Rumble on Sunday!

Also teased for tonight’s Raw is the reaction of Strowman to be kicked out of the main event of the Rumble, the new era of Bobby Lashley as Intercontinental Champion, and the new Superstars continue to make their presence felt.

That’s the preview for tonight’s WWE Raw. Let us know what you’re excited to see by downloading the Ringside News app and following us on Instagram. Enjoy the show!

On this special #MLKDay edition of Monday Night #RAW… pic.twitter.com/oTuFtLxOOE

We go live to the arena in Oklahoma City, and out comes the WWE Universal Champion, Brock Lesnar!

Lesnar and his advocate, Paul Heyman, make their way to the ring and Heyman introduces them. Heyman says they shall get right down to business; last week on Raw, Finn Balor pinned John Cena. Heyman says it was no fluke, there was no controversy; Balor stepped-up and seized the moment. So much so, that John Cena, the second greatest of all-time (behind Lesnar says Heyman), took the mic in his hand and said he beieves in Finn. Heyman says he should believe, and the entire WWE Universe does as well. Heyman says he believes in Finn Balor too. That is the theme of Finn Balor’s career: seizing the moment. And Balor seems to believe that he will capitalise on faith and circumstances, when he comes to the Royal Rumble on Sunday. Heyman says Brock has trained for Braun Strowman, but he won’t be facing Strowman, instead he has to face an opponent that is completely different, and he hasn’t trained for Finn. Heyman says that’s why Finn thinks he stands a chance against Brock Lesnar. However, this Sunday, his client will turn Finn Balor into a martyr; sacrificed for making everyone thinking he can conquer the unconquerable; sacrificed for thinking he can take what Brock’s got; sacrificed for thinking that he can end the title reign of Brock Lesnar. This Sunday, it will be Finn Balor on his back saying, “Oh my god, I believe in Brock Lesnar!” Lesnar holds up the WWE Universal Championship.

The man who WON the #RoyalRumble Match 20 years ago… @VinceMcMahon! #RAW pic.twitter.com/Me4QU6nusU

Suddenly, Mr. McMahon’s music hits! The old man makes his way to the ring to an excited Oklahoma. McMahon says Heyman is like an old school promoter trying to drum up some business. McMahon says the only way anyone can believe in Brock Lesnar vs. Finn Balor is if people believed in David vs. Goliath. McMahon says Goliath beat the holy hell out of David, but then David was then resurrected as Finn Balor. The fans cheered. McMahon claims Balor doesn’t have many fans. If any of the people in hillbilly land actually believe that Balor can beat Lesnar, then the believe in fairy tales. The fans boo and Vince asks why they’re booing, to which Heyman says he was speaking too fast for them. Vince doesn’t get to say much more before he’s interrupted.

The Monster Among Men, Braun Strowman’s, music hits, and he stomps his way to the ring. Strowman says last Monday was the worst night of his night because of Baron Corbin. Corbin cost him $100,000 and the Universal Championship. Therefore last Monday was also the luckiest night of Lesnar’s life. Strowman says that if Lesnar survives this Sunday, he’ll be waiting on the other side to rip him apart like one of Mr. McMahon’s limousines. McMahon tells him he’s lucky he’s still employed.

Finn Balor’s music hits and he makes his way down to the crowded ring. Balor says this is the same old Monday Night RAW; Strowman being Strowman, Brock being Brock, and so on. He says he knows Vince does not believe he can beat Brock Lesnar, to which Vince agrees and says he does not believe in fairy tales. Balor says he’s the guy that beat three other people, including the greatest of all time John Cena. Heyman corrects him and says Cena is the second greatest behind Brock Lesnar. Balor says he earned his opportunity to face Lesnar. Balor says he knows McMahon believes he can’t beat Lesnar, but he believes. The Balor Club believes. At the Royal Rumble, he will beat Lesnar and reclaim his Universal Championship. Strowman says he knows he could have beat Lesnar. Strowman doesn’t know if Balor can, but he better. Balor warns Strowman to keep his nose out of his business because he’ll beat Lesnar, which is something Strowman couldn’t do.

At this point, Lesnar and Heyman leave. McMahon calls him back, but Lesnar keeps walking up the ramp. Balor then corrects McMahon on his tale of David vs. Goliath; David took out Goliath. No one was laughing then. McMahon invites Lesnar and Heyman to come to ringside. Balor is going to reenact David vs. Goliath because he’s facing Braun Strowman now.

We return to see this match already underway. Strowman throws Finn from the ring, then turns his back to stare at Lesnar. Balor then comes back in, turns Braun around, and slaps him in the face. The fans “oooohh”, but Braun swings and Finn ducks. Balor tries to scoop Braun and tip him over, but Braun just clubs his back and Finn collapses. Balor looks for a slingblade but Strowman grabs hold of him and clubs his chest. Strowman chucks Balor out of the ring again and stares at Brock.

Braun leaves the ring, runs around the corner and shoulder tackles Finn against the barricade. Braun gets Finn back in the ring and applies a trap hold. Balor starts to fight to his feet but Braun headbutt’s him and Balor rolls from the ring. Strowman leaves the ring again, looks for the running shoulder tackle again, but Balor catches him with the slingblade! Balor gets back into the ring and the referee counts Strowman, who makes it back inside at 6.

Strowman runs at Balor in the corner but no-one is home. Balor ducks and dodges Strowman, laying in some kicks, but then Braun grabs hold of him. He lifts Finn for the running powerslam but Finn slides down and applies a sleeper. Strowman rams him into the turnbuckles to break the hold, but Balor jumps right back into it. Balor gets Strowman down to one knee, then knocks him onto his back and hits a double stomp! Balor takes to the top rope for the Coup De Grace, but Braun grabs him by the throat. Strowman tosses Balor to the outside and right into Brock Lesnar… who catches Finn in mid-air and hits him with a belly-to-belly on the floor!

The referee doesn’t call for the bell for some reason and the match continues. Brock steps onto the apron and lays his belt on the mat and taunts Strowman to come get some. Balor then pulls Brock’s feet out and he hits the apron/belt with his head! Balor then dropkicks the back of Lesnar, sending him into the ring post. Balor gets back into the ring and continues the attack on Strowman, before ducking a clothesline and diving over the top rope with a tope onto Lesnar!

Balor suckers Strowman into chasing him, then kicks him as he comes back into the ring. Balor slides out again and dropkicks Brock into the barricade, before running back into the ring and dropkicking Braun into the corner. Finn takes to the top rope and connects with the Coup De Grace, but before he can make the pin, Brock appears and hits him with an F5 and the referee calls for the bell.

Why the referee didn’t call for the bell earlier is beyond me. Lesnar takes his title and leaves up the ramp with Heyman.

Later tonight we’re getting Ronda Rousey and Natalya Vs. Sasha Banks and Bayley, but up next it’s a celebration of the new Intercontinental Champion, Bobby Lashley!

Bobby Lashley and Lio Rush come to the ring for their celebration.

Rush starts things by saying that Lashley is better than Seth Rollins and Dean Ambrose. In fact, Lashley is better than everyone in the locker room. Rush says they are not out here to issue an open challenge, because that’s for children. They don’t just fight for the hell of it, Lashley is a professional, he only fights for money. Instead of an open challenge, Bobby is going to stand on a podium with the Intercontinental Championship around his waist, and pose. Lashley does just that. He stands on the podium and begins posing but out comes Apollo Crews!

Crews comes to the ring, mocking Lashley’s poses. Crews says that Lashley is a star, no doubt, but nobody here paid money to see him post. They want to see him compete. He says he wants to face Lashley, even if it isn’t for the belt. Rush says Crews isn’t in Lashley’s league, so how about they have a posing competition. Apollo says he doesn’t even know how, to which RUsh says he clearly doesn’t know how to be a Champion either. Crews gets frustrated and agrees. They begin posing against each other, and Apollo poses in funny ways, getting the fans to cheer. Rush gets mad, as does Lashley, who attacks Crews. Apollo turns the table and throws Lashley from the ring, before lifting Rush in a military press and tossing him out and onto Bobby. Crews poses for the fans, who are really into it, as we head to a break.

We return to see this match underway. Lashley is in control as he clotheslines Apollo for a two count. Lashley whips Apollo to the corner and tackles him with his shoulder. Lashley sets Crews on the top rope but get kicked away, and Crews follows-up with a front dropkick from the top rope.

Crews kicks Lashley and hits a dropkick, as well as a kip-up, then heads to the top rope. Crews dives but Lashley dodges him, and Crews rolls through, then looks for a roll-up but Bobby kicks-out. Crews lifts Lashley up for a military press but he can’t hold him up and falls over. Crews gets up and goes for it again and this time lands it. He looks for the moonsault follow-up but Lashley rolls out of the way. Rush gets on the apron and Apollo grabs him, and throws him into the ring. Apollo lifts Rush for a military press but Lashley spears Crews for the win!

Just as Bobby is celebrating and Rush is putting the title around his waist, Seth Rollins’ music hits and out comes the Kingslayer. Lashley isn’t pleased but leaves the ring. The two come face-to-face on the ramp, but pass as Rollins has a match with Drew McIntyre next!