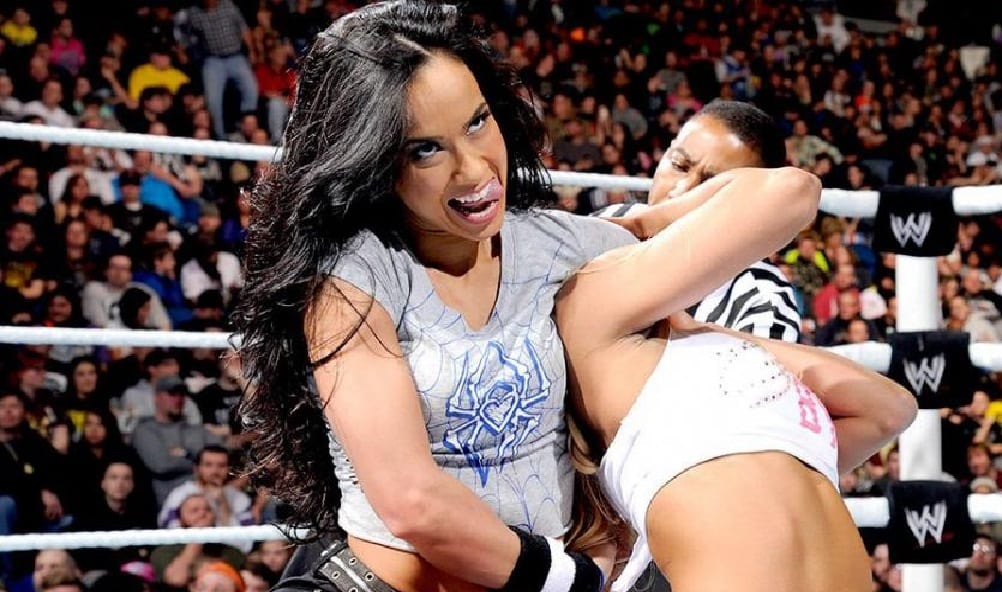 AJ Lee is no longer in WWE. She took off shortly after her now-husband CM Punk left the company and she hasn’t returned to pro wrestling since. Lee has remained busy, however, much like her husband it doesn’t seem like she’s itching to get back into the ring.

Former WWE Diva Cameron got to work with AJ Lee during her time in the company. In a recent interview with Ring The Belle, Cameron revealed that working with AJ Lee might not have been the best experience.

“I plead the fifth, just gonna leave it at that. We’re just gonna have a moment of silence because wrestling fans are gonna hate me out there. You know she did make a huge impact in the division, but what I will say I respect her and her work ethic and what she’s doing now with her books and stuff.”

“For someone who was new, I wish I could have had someone who was a little bit more guiding and not just kind of like leave me out with the wolves. That was what it was kind of like with dealing with her, major tough love. I don’t want to throw her under the bus or anything, it’s just was me being so new I would have expected someone to not show up at the ring five minutes before doors are about to open.

“You know what I mean, especially when there’s a match this big, they didn’t even know if the match was gonna even happen. I must spill some tea here because she said she was sick. Her stomach was hurting, but then she told me to do my move where I dropped the leg on her stomach. So I was like, ‘Girl, I’m [confused]?'”

“I have to do my signature move, but if your stomach is messed up and your ovaries, why would you want me to drop my leg on yours? I spilled a little tea there, but again wrestling community, IWC, I have for the girl! I respected how far and the impact she did make on the division. It’s just you know some people just can be a little difficult to work with sometimes.”

Cameron said she “has love” for AJ Lee, however, she could be a little bit difficult to work with at times. It seems like a lot of co-workers we know. However, not every workplace is as complicated and in the public eye as WWE.