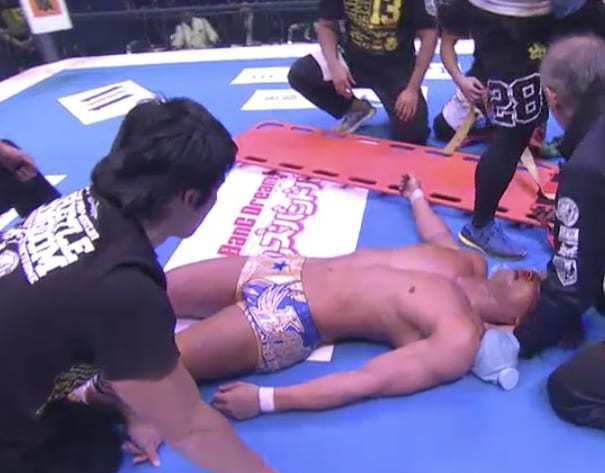 There were a lot of notable moments during New Japan Pro Wrestling’s Wrestle Kingdom 13 event. Every title changed hands and that included Kota Ibushi’s match against Will Ospreay.

After the brutal match, Ibushi was carried off in a stretcher. Dave Meltzer noted on Wrestling Observer Radio that although Ibushi’s concussion was legitimate the plan was always for a stretcher to be in play after the contest.

“The thing of the idea at the Tokyo Dome with Kota Ibushi was a work. The idea of the work, but Kota Ibushi is injured, but the stretcher job, he was not injured where he needed to go out on a stretcher. That was always planned.”

It is said that the “flash knock out” on Ibushi when hit him in the back of the head was always the plan and not when the concussion actually took place. It was actually a stray kick in the corner that caused the injury. The stretcher was always the plan to write Ibushi out of the story for “a few months.”

Ibushi and Kenny Omega are very close and he could follow Omega to All Elite Wrestling. However, Ibushi’s future might not be too certain along with Omega’s as they are currently both up in the air.