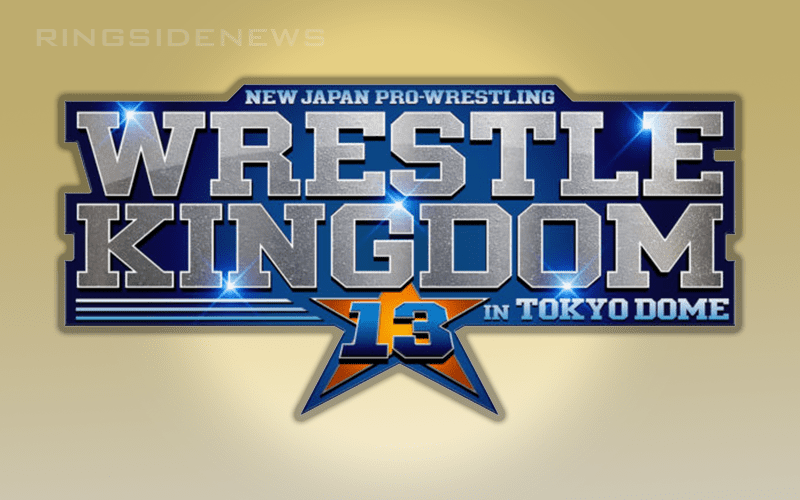 Wrestle Kingdom 13 is New Japan’s biggest show of the year. It will start at 3:00 am EST and we will be providing live results during the show. Please keep refreshing this page as the show carries on for more results.

This is going to be a packed show with a loaded card. The Tokyo Dome has sold more tickets than ever for the biggest event on the company’s calendar and like the last twelve years, they’re getting things started with a bang.

This event will be able to tell us about a lot of things to come. This is especially true with All Elite Wrestling coming up. Chris Jericho’s IWGP Championship defense against Tetsuya Naito has also received a lot of attention and rightfully so.

NJPW sent out a tweet translated from Japanese thanking fans already for the amazing turnout and the show hasn’t even started yet.

“Thanks to you, the number of tickets sold for this year’s Tokyo Dome tournament has already exceeded the number of visitors (34995) of the wrestle KINGDOM 12 in Tokyo Dome last year. I would like to thank all of you who have already requested the ticket.”

You can find the card below and remember that this show starts at 3:00 am EST.

Negata and Scurll started things out and both of them looked really great starting out. They traded dropkicks to the knees and then carried on for a bit.

Page hit a shooting star on Cobb from the apron to the floor that popped the crowd as they filed into the Tokyo Dome. Once they returned to the ring, Cobb nailed a nice fallaway slam and then Finlay and Takahashi tagged in.

Then after some miscommunication thanks to Chase Owens, Marty, Hangman, and Takahashi were eliminated.

Up Next: Chuckie T, Beretta, & Goto

The incoming team started making work. Chuckie T and Beretta both hit dives on their opponents to the outside. The Best Friends of Chuckie and Beretta looked good as they tagged in and out.

Nagata started firing back and created some separation before Cobb got the tag. Then Jeff Cob did his thing with a flying shoulder in the corner and a slam followed by a sunset flip for a two-count.

Goto and Cobb clotheslined each other over and over and neither of them budged until Goto got the better of them. Once the Best Friends got back in the ring, Cobb both of them at the same time.

Then David Finlay rolled Goto to eliminate them.

Nagata and Suzuki started out by hitting each other very hard. They have with each other.

As Cobb nailed an Olympic Slam, Nagata took a chairshot on the outside from Suzuki and they brawled all over the outside of the ring.

Suddenly, Finlay got hit with the kill bomb and was pinned.

Up Next: Taguci, Makabe, Yano

The new team didn’t make it to the ring before they were jumped. They were beaten around the ring and then fed into the ring where Smith and Archer kept picking them apart.

Makabe and Suzuki traded some very stiff forearms in the middle of the ring and Makabe ended up going off the ropes to hit an elbow to win the exchange.

Yano tried to hit Davey with the long turnbuckle, but he ducked. Yano took a Hart Attack but he kicked out.

Makabe distracted Archer and Smith while Yano hit low blows and rolled one of them up for the win.

It is very interesting that this match is going on first because come on, it’s going to be hard to top.

These two started things out with a string of counters before squaring off and then reversing more reversals. Then Ibushi nailed a dropkick and Will rolled out of the ring. Ibushi went for a dive, but Will jumped on the apron and kicked him on the way down. Suddenly, hit his own flipping dive to the outside.

They carried on for a bit and ended up squaring off in the middle of the ring. They traded forearms and then Will hit a kick, but Kota nailed a rana that sent Will out of the ring. Then Ibushi nailed a leaping corkscrew moonsault to the floor off the top rope.

Ospreay hit a rolling kick off of the ropes after a few more reversals and one or two near falls in this fast-paced match. Ibushi nailed a powerslam and then Will caught Kota in the corner with a kick and a roll-up for a two count.

Kota sold for a bit as Will Ospreay hit him, but then Kota started trading strikes with Will. Finally, Ibushi chopped Will down. After about a half-dozen reversals, Ospreay hit a nice Spanish fly on Kota to lay both of them out.

Kota got a nearfall and then Will returned fire with a German suplex. Ibushi shook it off and nailed a sick knee to the side of Ospreay’s head. That hurt a lot, but Ospreay kicked out of a pinfall even after a last ride powerbomb.

Kota climbed up top, but Will clipped his leg and hung Ibushi up. Will sat right in front of him and slapped Kota and Ibushi returned fire before Will just kicked his face in for a bit. They ended up on the top rope where Kota hit a double stomp on Will’s back.

Ibushi was busted open bad somewhere in that spot. Looked like his nose was busted, but the announcers said it was coming from his mouth. Ibushi hit a German, but Will landed on his feet. Then Will came back with a kick and an Oz Cutter, but Ibushi blocked it.

Will avoided a knee strike and landed a kick. Ibushi hit a clothesline, but Will didn’t go down. There were a half-dozen more reversals and then Ibushi nailed a hooked tombstone move for a two count.

Will nailed a stiff elbow to the back of Ibushi’s head and Kota didn’t look conscious. Will Ospreay hit the storm breaker and won.

Ibushi was led off on a stretcher.

This was a fast-paced match with one spot after another. Each man got their chance to shine with Sho and Yo really shining in a big way.

3K were about to close it out, but they were stopped giving Takagi a chance to capitalize. He hit two stiff clotheslines, but it wasn’t enough to close out the match. Then he hit a Last Of The Dragon to pick up the win and the titles