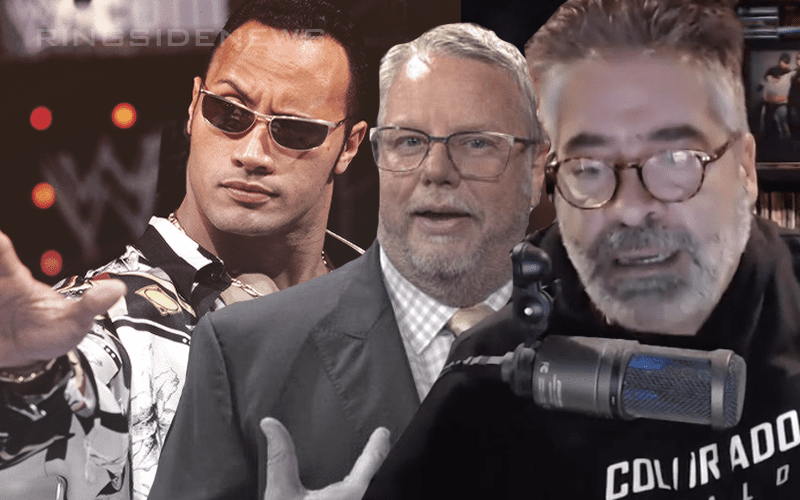 There was some recent controversy arise over who gave Dwayne Johnson his name of “The Rock” in WWE. It seems that our previous report was just the beginning of things.

Vince Russo has decided to speak out and he’s not happy about what Bruce Prichard said.

Russo said in the video you can see below that back in 1999, he told the same story about The Rock and how he got his name. Nothing has changed from what Russo said, however, others might get to change things which is his assertion.

Bruce Prichard gave credit of The Rock’s name to Jim Ross. Russo also pointed out how it’s not rocket science to change Rocky to The Rock, “it’s a gimme bro, you’re taking one f’ing letter off of the name,” Russo said.

Russo says that Prichard is trying to make him a liar now by calling out the fact specifically and sticking to his guns that JR came up with Dwayne Johnson’s wrestling nickname. Bruce’s story is presented as factual, but Russo disputes it in a big way.

“I remember vividly, I was in Bruce’s office. I was sitting across the desk from Bruce — Bruce TOLD ME when we bring The Rock back we’re putting him in The Nation [of Domination]. He already said that to me.”

Russo said it didn’t come until later that he was the head man in charge of WWE Creative. He also said that if he didn’t know what to do with a guy like The Rock as Bruce Prichard claims then he doesn’t deserve to be in the business either.

Vince Russo went on to say that if Prichard was the only one saying this then it’s a lie due to Bruce’s proclivity for storytelling. However, if Jim Ross said it, then it must be true.

“Bro, if Bruce said this then I would take it with a grain of salt because of Bruce’s past history of storytelling. If JR said this and I think JR has said this then I don’t doubt this for a shadow of a doubt.”

“I think JR and myself pitched Rock the same thing at two different times without each other knowing it. Real simple.”

Prichard said that Vince Russo pitched the idea to The Rock, but he rejected it because he didn’t want to turn heel until Jim Ross suggested it and then it sounded better.

Russo said he never called The Rock and pitched an idea. He wasn’t the head writer at the time, so he couldn’t suggest booking ideas like that for The Rock to reject. Russo also had evidence of The Rock telling Vince McMahon that he thought a heel turn was a great idea which he played from an old interview.

Russo wants a retraction, but Bruce Prichard doesn’t look like he’s going to give him one. We will keep you updated in case Prichard retracts his comments, but his co-host Conrad Thompson already said that “nobody cares.” As Russo said, “there’s nowhere else for Bruce to go.”

It looks like we might have to wait and see if The Great One is willing to comment to really get to the bottom of this.