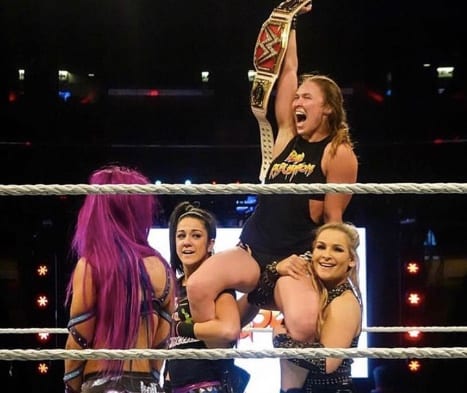 Last night’s show at Madison Square Garden marked the first time that female superstars have main evented at WWE’s most famous arena – and it’s fair to say that Ronda Rousey is pretty pleased about that.

While many fans are just waiting for the day that they turn her into a full on heel, she certainly seems to be quite natural when discussing her rise to the top of professional wrestling. She clearly has a passion for this and judging by this shot alone, it seems like she’s building friendships backstage as well as in the WWE Universe.

Ronda is a controversial figure at the best of times, mainly due to her background in mixed martial arts, but nobody can deny what she’s been able to produce in the ring since debuting back at the Royal Rumble.

Life is but a dream #wweMSG

Rousey was able to defeat Nia Jax in the main event, retaining her Raw Women’s Championship in the process.

The next few months are going to be incredibly important for the former UFC Champion, and that may well be an understatement. She will likely be defending her title once again at the Royal Rumble, and then, the Road to WrestleMania really begins – with many fans expecting her to defend her belt once again against Becky Lynch, and potentially even Charlotte Flair too.

Either way nobody can say that she isn’t committed to the cause, given that she’s taken on a much more intensive schedule than many were anticipating when the rumours of her transition first began.