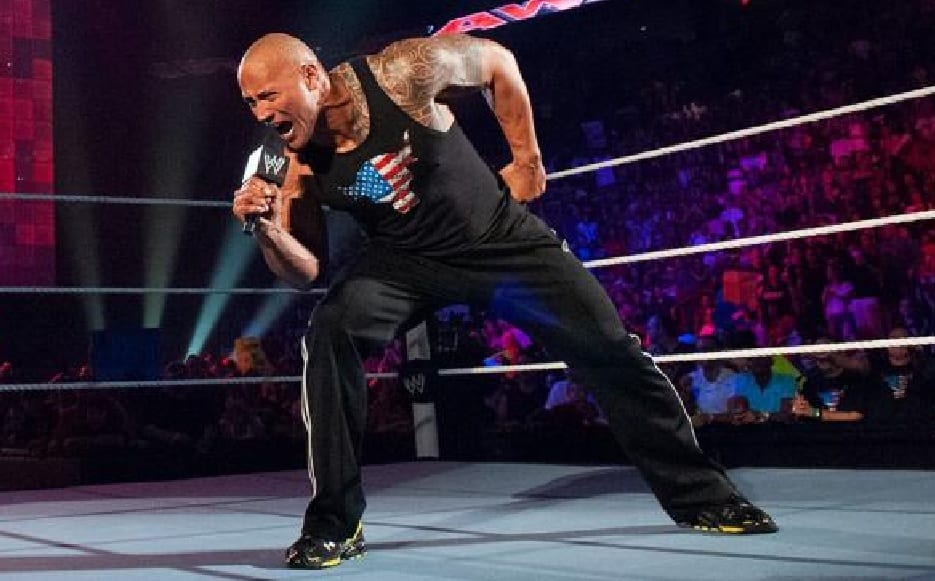 Before ever gracing the squared circle under the name of “The Rock,” Dwayne Johnson worked as “Rocky Maivia” in WWE. During an episode of his Something to Wrestle podcast, Prichard detailed how Johnson was given his new name and discussed the ups and downs of Johnson’s post-Maivia career.

To begin with, Prichard explained how Johnson ended up being a member of the Nation of Domination.

“When we made the phone call, the entire situation was that Rocky was out with a knee injury and Russo did not know what to do with him. He kept going, ‘I do not know what to do with this guy.’ I brought up putting him in the Nation of Domination. That way we protect him with his knee. They were chanting “Die, Rocky, die,” so he has a reason to be in this group, so bring him back as a heel. Let him cut the promos on the people.”

Prichard would go on to reveal that Johnson was uncertain about a potential heel turn. It took a phone call with both Prichard and Jim Ross to get Johnson to agree, and that decision paid off for “The Great One.”

“Russo had called Rocky and pitched it, but Rocky did not want to be a heel. He didn’t want to do it. So, Jim Ross and I got on the phone with him, pitched it, and then he started going, ‘Okay, I could do that.’ At that time, nobody dreamed that he’d be a breakout star and take over the Nation like he did. When he did, I’ll never forget Vince [McMahon] going, ‘God damn, what’s wrong? You put a microphone in his hand and the crowd goes nuts. Give him a God damn microphone and let him talk!’ That’s what made The Rock.”

Finally, Prichard revealed that it was Ross who came up with the idea to shorten the name “Rocky Maivia” into “The Rock,” and have Johnson talk in the third-person. These two aspects of his character carried him into the future and submitted Johnson’s place in wrestling history.

“In the pitch to Rock, [Ross] said “God damn, boy. I saw Deion [Sanders] cut a promo, and he’s gonna have a good game. Why don’t you refer to yourself [like Sanders did] in the third-person. Call yourself The Rock, just shorten it.’”

Johnson is now a top actor in Hollywood, and can be seen in some of the greatest films and shows of the past decade. He has returned to WWE on numerous occasions, and never ceases to wow the crowds around the world.

Do you think Johnson would have found the same success if he kept the name of “Rocky Maivia?” Were you a fan of Johnson’s previous character?

With H/T to WZ for the transcriptions.