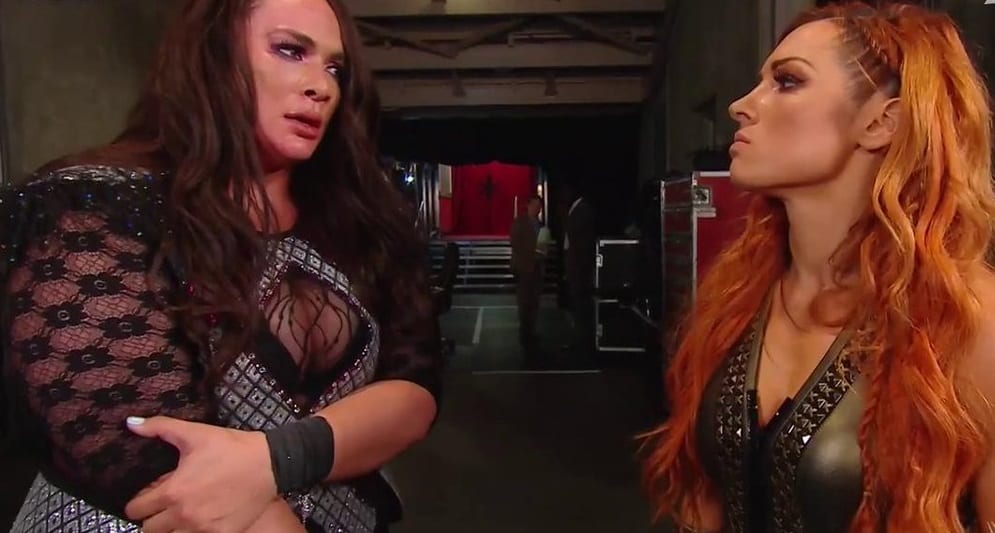 Becky Lynch isn’t happy with Nia Jax and the fact that she’s bragging about having a Face Breaker fist. Therefore, after Jax lost to Ronda Rousey last night at WWE TLC, Lynch kicked Jax in the stomach and punched her in the face before throwing her into some production equipment. Then The Man said, “Keep my name out of your mouth!” That seemed to settle things for now.

You never know how WWE could get Becky Lynch to Ronda Rousey at this point seeing how that is the match which is supposedly in the works. The Royal Rumble seems to be a perfect opportunity for Lynch to get to Rousey, but it might not be that easy in Phoenix.

Dave Meltzer noted on Wrestling Observer Radio that there’s a very good chance that Nia Jax and Becky Lynch will find themselves as the two remaining Superstars in their Royal Rumble Match. Bryan Alvarez noted that WWE could book “the old tumble out and tie” spot so it could set up a future match to determine who will get to face Ronda Rousey at WrestleMania.

Of course, Meltzer also noted that “I hope it’s over” between Nia Jax and Becky Lynch following The Man’s mini-beatdown of Jax backstage at WWE TLC. WWE still has to book the Fastlane pay-per-view before WrestleMania so Lynch vs Jax could be a plausible addition to the show.