WWE always love promotion, and they couldn’t pass up the opportunity to have two of their Superstars from the RAW brand attend an NBA game.

Those two Superstars were Apollo and Mojo Rawley. Rawley hasn’t been used on WWE TV recently, though it appears as if Apollo is in the midst of a character push over the next few weeks. However, it appears both men are being used for promotion of WWE at the aforementioned NBA game.

The game the two Superstars attended was the Sacramento Kings taking on the Chicago Bulls and both WWE Superstars were supporting the Kings, as evidenced by their jerseys displayed in the photo we’ve provided below. 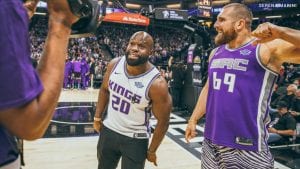 Maybe this was good luck on the part of Apollo and Rawley, as the Kings scored a total of 108 points in contrast to 89 points for the Chicago Bulls. It is unlikely WWE mentions this appearance on television unless the company decides to showcase a quick clip or catapult both men into a feud against one another, though you’d never know where WWE will start their story. The Nia Jax vs. Ronda Rousey story first begun at a press event also involving Charlotte months ago.

You can find further photos of the two at the game here.

What is your opinion on WWE sending out Superstars to events such as the Kings vs. Bulls game? Where do Apollo and Rawley rank on your list of favorite wrestlers? Let us know your thoughts, opinions, and reactions in those comments below.