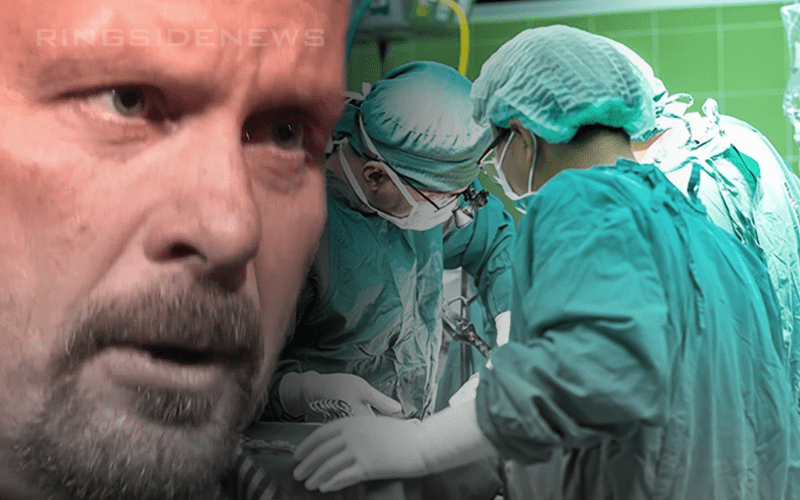 “Stone Cold” Steve Austin is known for his shaved head, middle finger, and plenty of Steveweisers. Some fans might not have noticed a little deal on his forehead until WWE upgraded to HD cameras though.

Austin revealed on The Steve Austin Show that he recently started undergoing treatments to get this thing on his forehead taken off. His doctor thought it might be cancer after Austin got it frozen off time and time again. He was numb to the pain, but there was still plenty of blood. Austin also revealed how shocked he was to find out just how big of a portion they were taking off of his head.

(Also, keep in mind that the terms “gig” and “color” in this quote is in reference to the practice of cutting your forehead during a wrestling match so you will bleed. It’s not ketchup packets, folks.)

“I’ve been having this little gimmick on my forehead for I don’t know how many years. Finally, the guy says, ‘Hey you need to go get that checked out, I think it might be skin cancer,’ and I say okay and I put it off for a little bit cause we all got sh*t going, right?”

“I go in and the guy gets a little blue pen and he carves out this little rectangle between my eyes and you know, they send it out, they test the tissue, you go back in and you just keep going back in until they get it all, right? So I’m laying there and he says, ‘Well, do you wanna see what I’ve done?’ Cause they don’t put the stitches in until the next day.”

“Dude, I’m all numbed up, I ain’t feeling nothing really and I’m laying there on the table, and you know how when you gig like when we used to gig cause I was telling the doctor because we were having a conversation just like this as he’s cutting on me. I go, ‘Hey doc, we used to get color like this,’ because as he’s cutting, there’s blood in that area he goes, ‘You sure bleed a lot.’ So I told him a story, but while he’s cutting he’s cauterizing so it smells like you’re branding a cow in there.”

Austin said when the doctor showed him the mirror so he could see himself, The Rattlesnake was shocked to see a circle a little bit bigger than a quarter was missing from his forehead. The doctor then explained to him how he plans on closing him up after two more procedures. Right now though, Austin is pretty bandaged up.

Hopefully, Austin will be looking better by the next time we see him on camera and he doesn’t get any bad news back from the lab.