Christian believes Charlotte and Bobby Roode have some of the best ring attire in WWE currently, as he really likes the robe look. Ryder says he likes when performers change their attire frequently, adding that he’s a big fan of Finn Balor’s demon attire.

Ryder informs that his personal YouTube channel captured lightning in a bottle. He started the year as a nobody, and then his channel led to him getting on television and winning a Championship. Unfortunately, once WWE took it over it wasn’t the same. He notes that it’s hard for other people to recapture the magic he found that year. 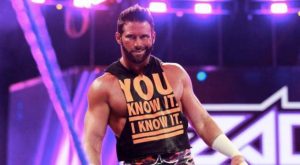 Another listener writes into the show and asks Ryder to name his #1 moment in wrestling thus far. He says his #1 moment was winning the Intercontinental Title at WrestleMania a couple of years ago. In terms of a retirement match sometime down the road, Ryder says he would like to face either Dolph Ziggler or Curt Hawkins in that scenario.

Matt Hardy Lobbying for Match Against Roman Reigns Before He Retires